WASHINGTON, Nov. 26, 2012 – There has yet to be a recommendation sent from Secretary Panetta on how many U.S troops should remain in Afghanistan after 2014.

“It’s entirely premature to speculate on troop numbers in Afghanistan between now and the end of 2014 or beyond,” he said. “In September, we completed the full withdrawal of the 33,000 surge troops, and we will soon begin considering how we move forward on further troop level adjustments which will include planning for our post-2014 military and civilian presence in Afghanistan.”

“As we’ve made clear on several occasions, any U.S. presence would only be at the invitation of the Afghan government, and aimed at training Afghan forces and targeting the remnants of al-Qaida,” he said.

“Ultimately, it will be the president’s call,” he said. “[President Barack Obama] will make decisions on these issues in the near future based on what’s in our national interests, as he has done in the past.

“He receives options from our military leaders on the situation on the ground,” Little continued, “and considers the recommendations with his national security team, including [Panetta], in a consultation with the Afghan government and our international partners.”

“There are no discussions, at this point, on particular options for 2013 at this stage,” he said. “As the president made clear in June 2011, our forces will continue to come home at a steady pace as we transition to an Afghan lead for security.” 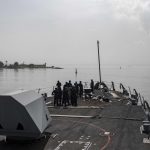