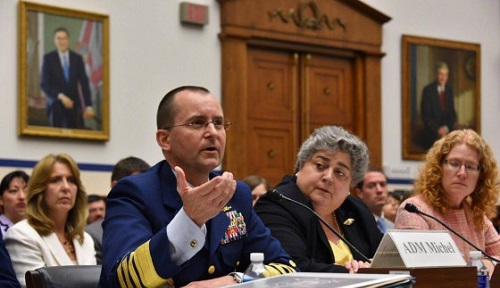 During the hearing, the Vice Commandant highlighted the various operations the Coast Guard performs in the polar regions, including the protection of living and non-living marine resources, economic development, scientific research, pollution response, search and rescue and national defense. All of these operations have a direct impact on U.S. sovereign interests and are guided by the National Strategy for the Arctic Region and the service’s Arctic Strategy.

The Vice Commandant also keyed in on the importance of navigation rights and referenced the challenge of foreign powers asserting claims on territories or imposing navigational restrictions.

“To respond to this challenge, the United States must have the ability to safely and reliably operate here year-round,” said the Vice Commandant. “Heavy icebreakers are the only assets capable of dependably fulfilling this critical requirement year-round. Yet, our Nation’s entire heavy icebreaker capability consists of a single 40-year old vessel, the Coast Guard Cutter Polar Star.”

The Vice Commandant addressed concerns about the timeline to build out new capabilities and assured the subcommittee that first and foremost the Coast Guard remained committed to maintaining its heavy icebreaking capability while it moves forward with recapitalization. He also shared how the Coast Guard will leverage its partnership with the Navy including the stand up of a joint program office that “will consider block buys, multi-year procurements and other opportunities to acquire icebreakers as quickly and responsibly as possible.”

“Similar to our experience working with the Navy to build Healy, a cooperative partnership that leverages the Navy’s expertise in designing and acquiring ships will provide mutual benefits to both services and will energize the U.S. shipbuilding industrial base,” said the Vice Commandant.

Finally, the Vice Commandant conveyed his thanks to the subcommittee and Congress for their efforts to ensure the Coast Guard has the capabilities to safely and reliably execute its missions.

“We look forward to working with Congress, the Navy and industry to identify ways to responsibly accelerate the acquisition of a new heavy icebreaker, continue planning the construction of additional icebreakers and explore capabilities that might be brought to bear to address our near-term concerns,” said the Vice Commandant. “We are absolutely open to innovative options, but also stress any short-term mitigation must be suitable for military employment and not come at the expense of our collective goal to build new heavy icebreakers.”