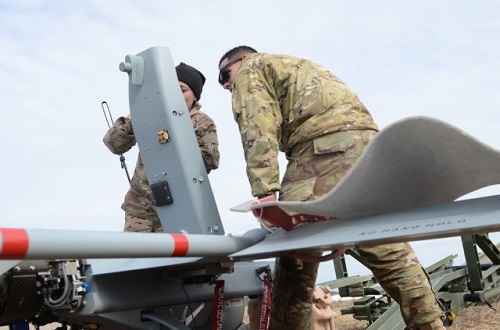 As soon as the sky was lit by the morning sun, 2CR Soldiers of the Regimental Engineer Squadron headed to the Tapa Training Area air field, manually pushing a Tactical Unmanned Aircraft System (TUAS) known as the RQ-7B Shadow.

“This is the first time that we have attempted to fly the Shadow here in Estonia,” said Sgt. Danielle Lucchesi, an RQ-7B Shadow crew chief with 2CR, Regimental Engineer Squadron. “We have just completed the pre-flight inspection and as soon as we get the clearance from air control, we will launch.”

The Shadow is the choice TUAS of the U.S. Army and Marine Corps for reconnaissance, surveillance, targeting, and assessment. It is designated as the RQ-7B by the U.S. Army and enables brigade commanders to see, understand, and act decisively when time is critical.

The Shadow can see targets up to 125 kilometers away from the brigade tactical operations center and recognize tactical vehicles up to 8,000 feet above the ground at more than 3.5 kilometers slant range, day or night.

Lucchesi went on to say that the main purpose of the flight was to aid the Estonian Army Air Defense Artillery unit in training with their anti-aircraft weapon systems.

“We will be flying the Shadow in a specific area to allow the Estonian ADA unit to hone in on their ability to identify an aircraft with their ADA system, lock their anti-aircraft weapons on the aircraft, and simulate shooting it out of the sky,” said Lucchesi.

The U.S. Soldiers of 2CR, Regimental Engineer Squadron, will continue to train with the Estonian Army ADA unit for the next couple of weeks in preparation for future combined field training exercise such as Summer Storm and Saber Strike, which will take place within the next couple of months in Estonia and Latvia.