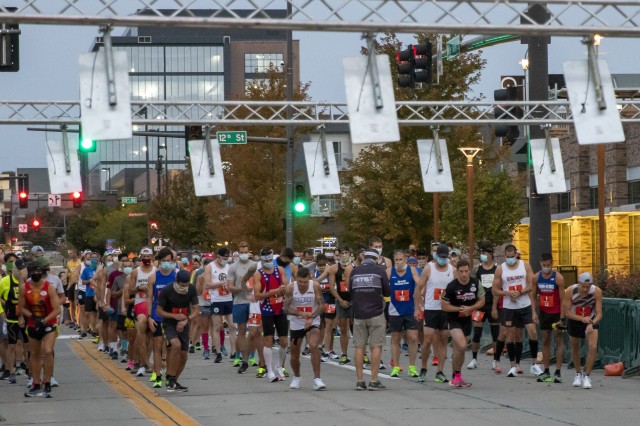 Fortunately, the Omaha Marathon was a “Go,” and more than 125 National Guard runners traveled to the familiar state of Nebraska to run a similar 26.2-mile race in a different city, on a different route, during a different season, but with the same goal in mind.

“We are getting ready for the first marathon in a lot of months for many of us due to COVID,” said Capt. Kenny Rayner, California Army National Guard, the day before the race.

Because the pandemic forced the cancellation of many traditional road races, including the Boston Marathon – canceled for the first time in its 124-year history – the Omaha Marathon was the first full-length event this year for many of the National Guard runners.

“I’m a little nervous because in Lincoln you just know exactly where you’re going, and you kind of have that mental preparation beforehand,” Rayner said.

Rayner, who has been with the Marathon Team since 2013, said the National Guard runners typically start training in January for the May race in Lincoln, while this year’s race took place in Omaha in September – under COVID restrictions. Runners were expected to wear masks at the start and finish of the race, and aid stations were mostly self-service with small, capped water bottles instead of open water cups.

The lack of other organized events, including 5K, 10K, and half-marathon races, made training more difficult. Restrictions on gyms and training facilities and mask requirements in some states created new challenges for runners, too. Additionally, for some runners on the West coast – like Rayner – COVID restrictions and wildfire smoke forced runners to train with masks on, even while running indoors on treadmills in the weeks before the marathon.

“I think all of us just kind of have to get used to the COVID environment and how it affects racing. It’s affected our training, so it’s just going to be a different race altogether, I think, for a lot of us,” he said.

The pandemic also changed race plans for a few Arkansas National Guard runners, including retired Lt. Col. James Mann, running coordinator for the Arkansas Army National Guard, who ran his last Lincoln Marathon as a Guardsman before retiring in June.

“Since I did my first Lincoln in 1989, this year was supposed to be my fifth decade of doing the Lincoln Marathon, so I was kind of looking forward to that. Plus, actually it being my last official race as a Guardsman,” Mann said. “Being in Omaha, it is really great that we are getting a race in, but it will definitely be different not being on the same course that I have run year after year.”

Mann ran the half marathon in Omaha and hopes to return to Lincoln in May to make up for what he missed this year.

He encouraged young members of the Guard to participate in the National Guard Marathon Program.

“I would say that if you ever come to one, then you’ll be hooked from then on because it is just such an awesome experience,” he said.

Rayner was not only the winner for the National Guard but the first to finish the marathon, beating out the entire Omaha Marathon field as well. While winning wasn’t his ultimate goal, Rayner said he is always proud to represent the National Guard on the podium. More than anything, though, he said he loves the travel, the memories and the camaraderie built with the other athletes. He said he plans to continue to run as part of the National Guard Marathon Team as long as he can.

“It’s definitely the best experience in the Guard I’ve had,” Rayner said.

The top National Guard runners selected for the 2020-2021 All-Guard Marathon Team will travel the country to compete in select events as part of the All-Guard Military Competitions Program.

The All-Guard Military Competitions Program additionally encourages and enhances the National Guard Retention Program by instilling physical fitness, self-discipline and esprit de corps among National Guard members from all 50 states, the District of Columbia and U.S. territories. Anyone interested in joining the All-Guard team should reach out to their state’s program coordinator and plan to compete in the time trials back at the Lincoln National Guard Marathon in Nebraska in May 2021.