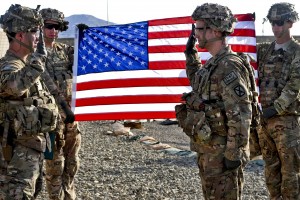 Your Decision
Your decision to join the U.S. Military will have life-changing implications. The lessons you learn in the military about yourself and the world around you will make an indelible impression on you for life. Below are a few facts, observations, musings, and more to help you in your decision about joining the military.

The military, of course, is not a civilian job. If you join, you should be prepared to take up arms against enemies of the United States. For example, the basic mission of the Marine Rifle Squad is “TO LOCATE, CLOSE WITH, AND DESTROY THE ENEMY BY FIRE AND MANEUVER, OR REPEL THE ENEMY’S ASSAULT BY FIRE AND CLOSE COMBAT”. Not exactly like working in a cubicle! Many reservists and military personnel in support roles are finding out in Iraq that you don’t have to be in a Marine Rifle Squad to find combat action.

Featured Service – U.S. Army
A Soldier’s personal decision to serve demonstrates collective strength: strength from within himself/herself, strength from within his/her family and strength from those who influence this important war-time choice for our nation. The Army and its Soldiers are strengthened by those who understand and support the decision of their loved one, friend or employee to serve our nation and elevate his or her future. Is the Army right for you?

Reasons for Joining
There are many good reasons to join the military:

1. Duty to Country
The anti-communist writer Robert Heinlein, in his book Starship Troopers (the original book, not the movie), commented on the differences between a citizen (civilian) and a soldier: “The difference lies in the field of civic virtue. A soldier accepts personal responsibility for the safety of the body politic of which he is a member, defending it, if need be, with his life. The civilian does not.”

The military academies provide a college degree free of charge. Enlisted personnel can earn up to $50,000 in financial assistance towards a college degree and other post-high school education.

VA home loans, veterans’ franchise programs and other benefits will help you throughout life.

Gain valuable experience for civilian jobs. From military police to space science applications in the U.S. Air Force, you can gain valuable job experience in a wide variety of fields. Many officers use their military experience as a springboard to the corporate world or specialized government positions such as those in the ATF, CIA, FBI, State Department, etc.

Thomas E. Ricks, a civilian reporter for the Wall Street Journal, followed a group of Marine recruits from boot camp to graduation. These experiences formed the basis of his book Making the Corps. He found that the military does a better job in teaching life’s important lessons than does for example the average American high school:

Preparing for the Military
One of the many words of wisdom you may hear in the military are the “Seven Ps”: “Prior Proper Planning Prevents Piss Poor Performance.” This statement should certainly be heeded in preparations for the military. A few hints:

1. Find the right military job for you. There are hundreds of military occupational specialties to pick from. Do your research, then talk to a recruiter. And then get it in your contract.

2. Realize that military jobs are military jobs, not civilian jobs. Remember Pauly Shore in the movie In The Army Now? His movie character’s experience at cleaning swimming pools in civilian life didn’t exactly translate into his military job of water purification in the desert!

3. Double-check the info you receive from your recruiter with someone you trust who has served in the military. Recruiters have been known to “stretch the truth” from time to time.

4. Prepare yourself physically. Don’t waste your time, and the military’s, by reporting to boot camp or military school out of shape. If you are too out of shape to train with the others you may be placed in a separate remedial physical fitness program. In boot camp, placement in such a program will delay your graduation. Boot camp is generally not a fun place to be, and you will want to graduate in the shortest possible time.

5. Prepare yourself mentally. To maximize your opportunities in the military you will want to score as high as possible on military entrance examinations such as the ASVAB. Many jobs in the military require certain minimum scores on these exams. There are many study guides available – do your homework before taking the test(s).

Surviving Basic Training
Seven tips to help you make it through boot camp:

1. Have a positive attitude. Your time at boot camp will be one of the defining moments of your life. Make the best of it. Make yourself proud – do the right thing and you’ll have something positive to remember for life. Moreover, inevitably there will be a few who develop bad attitudes about the situation. Don’t buy into their negativity.

2. Just do it! Believe it or not, there’s a purpose for every silly thing you do in boot camp. Diligently comply with all of your instructor’s commands. U.S. military drill instructors/sergeants are consummate professionals – the best in the world at what they do.

3. Remember, it’s not personal. Your drill instructors/sergeants will find some of the most obscenely funny things to say about you. But they don’t really mean it, usually. At first, you will probably hate your instructors/sergeants, not believing that God could have created such vile persons. However, by the end of training, you might just have a grudging admiration for their efforts.

4. Don’t eat anything you have been ordered not to eat, or you’ll be eating a lot of it! Example: A private was caught eating the candy bar from an MRE (Meal Ready to Eat) during field training. Since the recruits had already been ordered not to eat candy bars, and the forbidden candy bars had already been collected by the drill instructors, there was a ready supply at hand for punishment. “So you want to eat candy, well here’s a few hundred bars – start eating.” The rest of the platoon had to watch while the poor guy had to eat candy bar after candy bar until there was chocolate oozing from his mouth and running down his khakis. After that, he was known simply as “the candy man.”

5. Don’t draw undue attention to yourself: Unless you’re a glutton for punishment or like living on the edge, do not volunteer for anything. (Attention at basic training is rarely good.)

6. Help your buddies: In basic training, you’ll probably hear about the importance of teamwork in the military and that a chain is only as strong as its weakest link. If your buddy is struggling in a particular area, give them a hand.

7. Don’t Worry: Though basic training may seem impossibly hard at first, remember that it is a process that has been successfully completed by millions of other people before you. In fact, as hard as it may seem, the drill instructors/sergeants want you to succeed and graduate – the military needs people and they don’t bring people to boot camp just for harassment. Also, some people prior to boot camp are worried that their fellow recruits will all be six foot four inch blonde Marine killing machines. Although there is sometimes such a person in each recruit platoon, you’ll be relieved to know that most recruits are average Americans – short, tall, overweight, underweight, country, city, bright, dumb – and most of them will be just as scared or concerned as you are about what faces them at basic training.