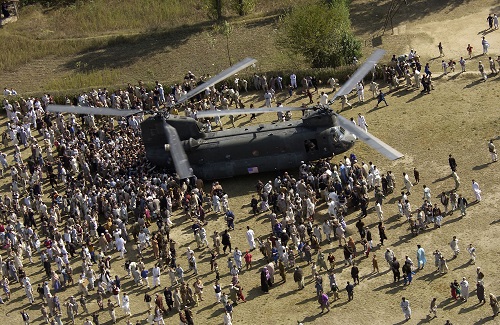 A notable example of HA/DR is Operation Tomodachi in Japan in 2011, carried out to provide relief after the 9.0-magnitude earthquake and tsunami that devastated northeastern Japan and triggered the meltdowns at the Fukushima Daiichi Nuclear Power Plant.

According to a RAND Corporation report titled “Lessons from Department of Defense Disaster Relief Efforts in the Asia-Pacific Region,” the U.S. response, “illustrates the wide array of capabilities the United States can bring to bear on an incredibly complex disaster and also illustrates the special role the United States assumes in a disaster that directly affects its forward-based forces.”

The 2011 disaster in Japan took more than 20,000 lives, yet many more may have been lost without the humanitarian efforts of Japanese relief workers and their willing friends in the region. It is not uncommon for both victims and first responders to suffer from post-traumatic stress disorder (PTSD) following such traumatic experiences.

Proper preparation, support, and recovery can help prevent distress and health risks among military personnel participating in humanitarian assistance. Alongside these military service members are other volunteers, including social workers who help provide emotional support for victims and first responders alike. Natural disasters are devastating not only for the initial damage that is caused, but also because of the suffering they leave behind.

In the aftermath of the Fukushima disaster, an increased rate of stress-induced deaths and suicides were reported. Victims and first responders alike often need emotional support to make sense of the trauma they’ve faced. The importance of tending to mental health in crises as a part of a person’s overall wellness cannot be overlooked.

Relief and humanitarian work is a valuable mission for many reasons, including building relationships and extending good will to our existing allies. That’s inherent in the very name of the previously mentioned operation, “Tomodachi,” which means ‘friend’ in Japanese. Sometimes decisions to extend aid and support serve security and defense purposes, but other times it is the right thing to do in order to help our friends.

U.S. military humanitarian efforts provide manpower and expertise to our allies when they need us most. Preparation is key to preventing unnecessary stress and illness of disaster first-responders. Caring for the physical and emotional well-being of disaster victims and first responders must always be a priority. Ultimately, humanitarian missions are a necessity to demonstrate solidarity and promote friendship with our allies and neighbors around the globe.

About the Author: D.M. McCauley is a former U.S. Navy sailor who worked in Intel. After the service, he has dedicated his time to writing and traveling with his significant other.