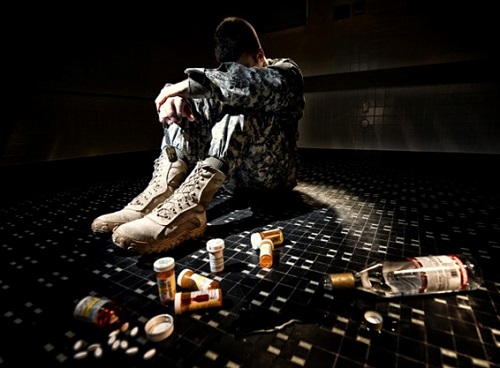 February 3, 2016, by Helen Duke – Overcoming addiction as a Veteran is hard to do, but not impossible. A look at the numbers of veterans who struggle with addiction once they return home is not pretty reading. The mental image is even worse. These are men and women who have served their country, dedicated their life to it, and who now find themselves alone, forgotten, and in need of help that all too often is too slow to arrive.

Numbers are hard to pin down, but there are many studies that indicate that veterans are more susceptible to depression, alcoholism, drug use, and other problems that those who have not served. The reasons are complex and simple at the same time: it is hard to integrate into civilian society after many years spent in a very special club. However, this journey doesn’t have to be a one-way street. There are things you – or your loved one – can do to ward off and beat addiction and the other issues that plague veterans.

Veterans returning to the mundane trials and tribulations of everyday life can often feel isolated. Part of a society of people they cannot – or perhaps inherently do not want – to relate to, and lacking the camaraderie of their fellow soldiers, they shield themselves from the pain by withdrawing deeper and deeper into themselves. Yet isolation is the bedrock of addiction. Even though it may not seem a sinister threat, isolation can creep up on an individual without them realizing it, and addictive tendencies can begin to show.

That’s why it’s important to remain connected to the wider society. Beating isolation and feeling part of something bigger than yourself is a crucial part of overcoming alcoholism and drug abuse. This may involve reaching out to veteran organisations, or finding a project you’re passionate about and going at it with all the gusto you can muster. Facing and beating isolation isn’t easy, and involves courage, but it’s a necessary step to take if you’re going to return to your brilliant best.

We know many soldiers don’t, for whatever reason, like talking about their experiences during deployment. That’s just fine, you don’t have to. However, talking about what’s going on right now, as in in your day to day, post soldier world is important. There may be loved ones around you who know that you’re not doing well, but have no idea what exactly is the problem. Chances are, you don’t know either, and you won’t unless you have some way to express the things that are happening in your head. Start a journal – you’ll be thankful that you don’t have to hold all your thoughts in your head at once. When things are a little clearer, start the dialogue with your friends and family to let them know where you are up to. It won’t be easy, but you’ll be surprised at just how open they’ll be – especially if you’re coming to them with help about how to overcome an addiction.

Take Care Of Yourself

You’ve been dealing with issues much larger than deciding what to have for dinner or which bank account you should open. You’ve also been doing some pretty rigorous exercising that’s kept you fit as a fiddle. Now that you’re home, you’re going to have to start doing these things, for your own sake. You don’t have to go overboard or get everything done in one day, but you’ll be surprised at how satisfying taking care of yourself really is. Learning how to cook has helped veterans overcome issues such as PTSD, so give it a try. Go jogging, join the gym, and tidy your apartment. If you make your bed in the morning, you’re on way to a successful day. Finally, take care of yourself by being kind to yourself. You’ve experienced something only a tiny percentage of people experience, and you’re on your way to coming through it unscathed on the other side. It might take a while to overcome addiction as a Veteran, but you’ll get there.