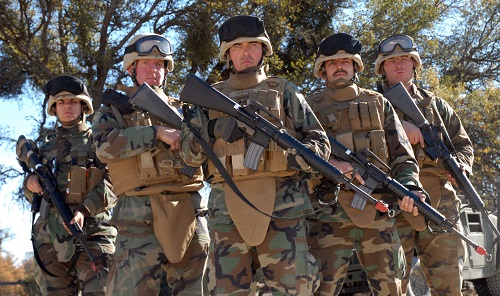 May 12, 2016 – Perhaps more than any other profession, the Armed Forces require body armor of the highest level and versatility. This is true to such an extent that, apart from perhaps the Police, the Military has been the driving force behind the growth of the body armor industry. Servicemen and women require protection against extremely dangerous threats, but also adaptability and versatility in their vests. This is why bulletproof vests for the Armed Forces continues to be a major focus for body armor manufacturers, and why their research and development focuses on solving the problems facing those in the Military. This research and development has led to a dramatic improvement in the protection and accessibility of armor over the past few decades, and there are interesting developments being made continually that will create even better armor for soldiers.

Women and men serving in the Military will require hard armor because of the protection it can provide. Most occupations can make do with soft armor, as the additional weight and bulk of hard armor is simply unnecessary. However, soldiers will regularly face the highest caliber weaponry, and need to be protected accordingly. Of course, this means that their armor will be heavier and less flexible than their counterparts in Law Enforcement for example. Therefore, manufacturers of body armor are continually looking to find new materials that are lighter and thinner. Most branches of the Military outsource their research and development to body armor manufacturers, thereby reducing costs and taking advantage of their expertise. These lucrative contracts are often hotly contested, though some branches do conduct their own R&D. The US Navy, for example, has been looking at creating lighter inserts for vests and upgrading existing carriers, thereby cutting down on costs and increasing protection.

Developing lighter and stronger body armor is obviously important for the Military, as it makes a dramatic improvement to their efficacy. However, it is just as important to ensure the vest is as comfortable as possible. One of the most pressing threats facing the modern soldier is the IED, and explosive protection is something that every soldier requires. However, this can make a vest far bulkier and much heavier. This in turn means that soldiers may not be able to perform as effectively in extreme weather conditions, and their armor can easily become very uncomfortable. Therefore, by making protective materials thinner, body armor can be made more comfortable and more protective.

While research into new materials and the development of existing materials is naturally an area of focus for manufacturers, many are also looking to create carriers for vests that are more breathable and easier to wear. Furthermore, there has been an increase in the sizes available to soldiers, and an emphasis on creating armor for female body shapes. All too often female soldiers have had to wear armor designed for men, meaning they are at best uncomfortable, and at worst unprotected. By rectifying this insulting oversight, bullet proof vest manufacturers can provide female soldiers with armor that will actually keep them safe and comfortable, while also improving Military body armor as a whole.

This reflects the focus of manufacturers on making thinner and lighter vests for the Military, the benefits of which are obvious. This development has been aided greatly by the increased adoption of new technologies; for example, augmented reality and 3D printing have made design and development more accessible, and allow for unique designs in body armor to be made easily. This has, for example, allowed researchers to create new scaled armors in the style of medieval chainmail and lobstered gauntlets. Before the development of new technologies the cost and logistics of creating vests in styles like this would be far too prohibitive.

By looking at more inventive methods of providing protection, researchers can provide armors that are potentially far cheaper and far more effective. For example, the use of paper pulp as an absorbent material holds exciting opportunities, as it can potentially provide a lightweight and flexible material that would far exceed Kevlar’s strength. Despite the use of new design and manufacturing tools, the current cost of manufacturing these new materials remains prohibitive. Indeed, many of the more ‘futuristic’ developments to ballistic materials are still incredibly expensive, making them of little immediate benefit to manufacturers and customers alike.

This is in part why some organizations look for more immediate changes to armor; the US Navy for example contends that more practical and cost-effective solutions should be found. They argue that the research outlined above is expensive and time-consuming, and soldiers can instead take steps to improve their own preparation and thereby their own protection. The Navy argues specifically that, according to Government Research, soldiers have been outfitted with armor at an unnecessary level, providing them with protection against threats that they will simply not face. Their argument is, therefore, that more preparation needs to be done before missions and movements to ensure soldiers are outfitted appropriately.

Of course, others argue that it is impossible to know what threats the soldier will be facing at any one moment and that it is their responsibility to protect soldiers against any and all threats in order to keep them safe. Too many deaths have occurred due to improper equipment, and so creating more versatile armor will help protect these brave women and men. Whether this development focuses on improving existing designs, or finding protection through materials as diverse as wood, algae, and even water, the future of body armor promises to help save more lives than ever before.