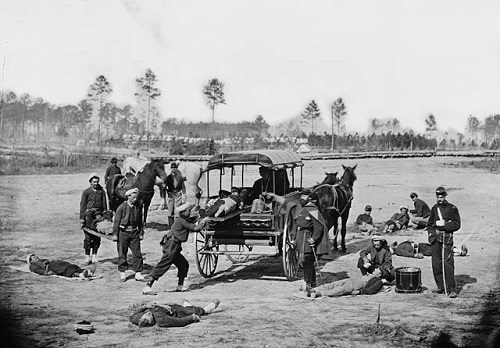 September 21, 2016, by Brooke Faulkner – It’s no big secret that military institutions the world over tend to be at the forefront of their countries’ cutting-edge technologies.

The military has more motivation to innovate than any other entity. Better technologies and supplies mean soldiers are more empowered to succeed, and more likely to triumph when called upon to act.

Industries rely solely on money for motivation, and while we all know that’s a powerful force, it pales in comparison to national pride and the drive to protect our servicemen and women.

Here are the top 10 military innovations that have trickled down into daily civilian life.

The word ambulance originally referred to a moving hospital that followed an army from battle to battle, but it has since developed into the modern form of hasty transportation for the wounded to the nearest hospital. The first ambulances appeared in 1487, when the Spanish military used them for emergency transport of soldiers on the battlefield. Those first ambulances – simple carts – were a far cry from the decked-out emergency vehicles we know today, but they did the job.

It is believed that the US Navy invented the first air conditioner in the world. It makes perfect sense, being trapped on a ship all day with a bunch of smelly men – the least you could ask for would be a bit of cool air. But a Navy man isn’t one to complain, so believe it or not the innovation did not come at the behest of the sailors.

The Navy Corps of Engineers actually built the cold air machine in 1881 to ease the pain of President James Garfield, who had been shot during an unseasonably hot July.

The concept of blowing cold air over ice (to greatly oversimplify) became the basis for modern air conditioning.

In 1945 WWII, self-taught US engineer Percy Spencer was testing out military-grade magnetrons – the vacuum tubes inside radars – and made the surprising discovery that the microwave radiation produced by the magnetrons melted a peanut butter candy bar in his pocket, but not the wrapper. Enter the microwave oven. Radar technology of the day also developed into self-guided missiles, radar guns, and meteorological measuring systems.

Suddenly, estimating the time based on the location of the sun was no longer a viable option. Neither was rifling through one’s pocket in the trenches to find a clock. Soldiers began wearing watches on their wrists.

European soldiers improved their wristwatches even more by outfitting them with unbreakable glass and radium to illuminate the display at night. The practicality of the wristwatch quickly caught on, and civilians soon traded their watch chains for wrist bands.

The history of canning in the military began with none other than the Big Little Guy himself, Mr. Napoleon Bonaparte. In an effort to find an efficient way to feed French troops, Napoleon offered a prize of 12,000 francs to whoever could devise a method to preserve food long enough to get it to troops in faraway locales. Nicolas Appert – who had been obsessed with figuring out canning for years – answered the call.

Canning went on to become an invaluable technique that fed military men and women throughout countless civil wars, WWI, and WWII.

And of course, civilians have come to enjoy a good can of green beans every now and then too.

No one likes sitting on a jumbo jet, totally captive and squished between strangers for hours on end. But imagine the alternative. Try to take a carriage across the Atlantic. The rise of airborne warfare in WWII played a huge role in the quick advancement of air travel – the jet in particular. Both the Allies and Axis forces raced to create their best jets, and both were successful. The German Messerschmitt Me 262 Schwalbe, aka the “Swallow,” was the world’s first operational fighter jet.

Aviator sunglasses are another product for which the US Air Force, or Army Air Corp as it was known in WWI, can take partial credit. The iconic glasses were first designed for fighter pilots and bomber crews whose lives depended on being able to spot an enemy plane zipping by, even with the sun’s glare in their eyes.

Because of the meticulous nature of a pilot’s work, Aviator sunglasses were designed specifically to offer 100% UV protection. Most sunglasses only provide a fraction of the protection. And let’s be honest, they don’t look half as cool.

Men’s shaving instruments have an arduous, patent-war laden history. But ever since WWI when the modern safety razor was included in every American GI’s shave kit, the fight for best razor has clearly been won. The safety razor is triumphant. The idea of the safety razor was to make shaving as safe, fast, and clean as possible. GIs in the trenches obviously didn’t have time to to visit their local barber when they got a little scruffy. The word got out quickly to civilians, and now there are entire pharmacy aisles dedicated to safety razors.

Have you discovered other gadgets or innovations in your daily life that we owe to the military? Please share them in the comments!

Author Bio: Brooke Faulkner is a mother of two and writer based in Portland, Oregon. She loves anything to do with historical nonfiction.