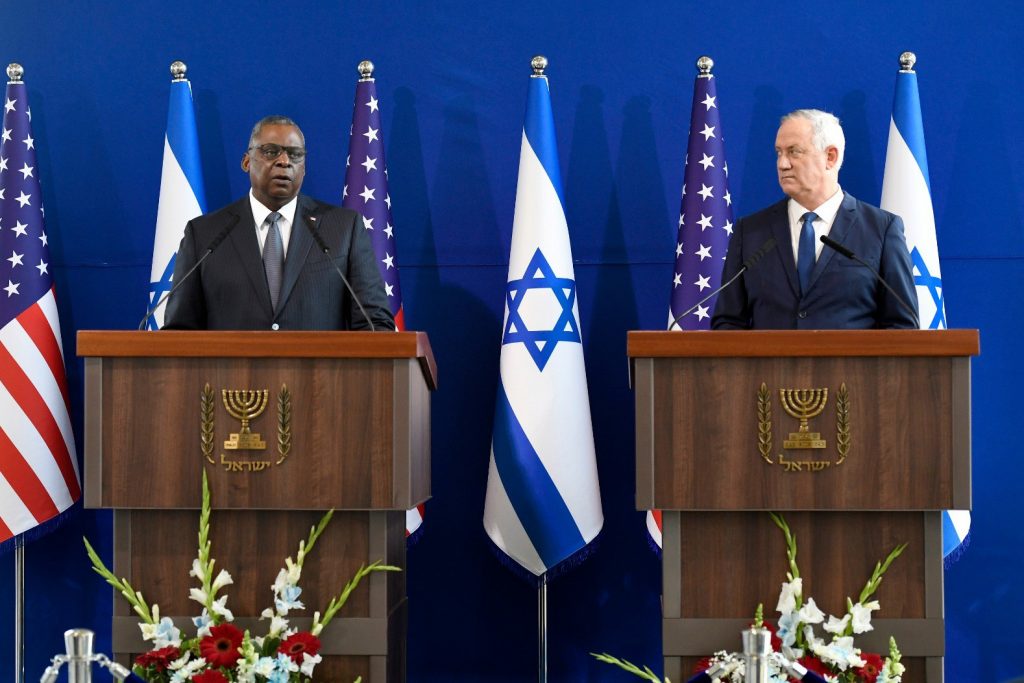 APRIL 12, 2021 – The United States’ commitment to Israel’s existence and security began moments after Prime Minister David Ben-Gurion proclaimed the establishment of the state of Israel in 1948.

Then-President Harry S. Truman recognized the nation immediately, and the United States has become a strong strategic partner through U.S. administrations of different parties and through many conflicts.

The two men covered a wide range of issues, and Austin said he was pleased with the discussions. “I wanted to convey the Biden-Harris administration’s strong commitment to Israel and the Israeli people,” he said following the talks. “As a major strategic partner for the United States, our bilateral relationship with Israel, in particular, is central to regional stability and security in the Middle East. And during our meeting, I reaffirmed to Minister Gantz our commitment to Israel is enduring, and it is ironclad. And I pledge to continue close consultations in order to ensure Israel’s qualitative military edge and to strengthen Israel’s security.”

Austin noted that the United States marked Holocaust Remembrance last week. “Minister Gantz, you, as a son of a Holocaust survivor, know better than most the horror and heartache your family endured,” Austin said. “We remember the 6 million Jews and the millions of others who perished during the Holocaust; may their memory be a blessing, and let it be a solemn reminder of our duty to be ever vigilant against mass atrocities.”

It is also sobering that Austin’s visit coincides with Israel’s Remembrance Day, which is similar to America’s Memorial Day.

But the Middle East is still a dangerous neighborhood. “I … appreciated hearing Minister Gantz’s perspectives about the challenges in this region,” Austin said. “We addressed a broad range of defense issues, to include Israel’s long-term planning for defense acquisitions and regional security challenges and U.S. support for efforts to normalize relations between Israel and Arab and Muslim-majority nations.”

In his remarks, Gantz specifically pointed to the threat from Iran. He said Israel “regards the United States as a full partner across all operational threats, not the least, Iran.” The fundamentalist leaders in Tehran pose a strategic threat to international security to the entire Middle East and to the state of Israel, the Israeli leader said.

“We will work closely with our American allies to ensure that any new agreement with Iran will secure the vital interests of the world, of the United States; prevent dangerous unrest in our region; and protect the state of Israel,” he said.

Gantz said the ties between the U.S. and Israeli militaries are so close because the nations share the same values and beliefs in basic human decency. “I find great comfort in the assurance of our people’s unbreakable bonds and in the knowledge that both in the United States and in Israel, forces of good act to promote unity, solidarity and diversity,” Gantz said.