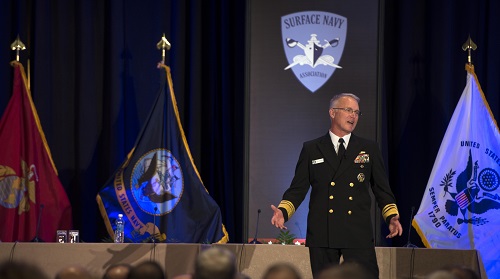 The theme this year is “Distributed Lethality: Enabling Sea Control” to highlight the doctrine of distributed lethality as a valuable warfare strategy that enhances Naval power at and from the sea.

The symposium gives Navy leaders, government officials and members of private industry an opportunity to discuss the continued national value of a strong Naval Surface Force.

Vice Adm. Thomas Rowden, Commander, Naval Surface Forces, opened the symposium with “The Surface Navy Today” where he talked of returning to sea control and strengthening our naval forces.

“We, as the United States Navy, are back in the sea control game again in a big way and just how we got here is worth remembering,” said Rowden. He spoke of the Navy’s history and the nearly 600 ships in the 1980s. “It was a powerful Navy able to impose sea control where we needed against a powerful foe that wanted to deny it. Simply put the world has changed and so must we.”

Fleet and force Master Chiefs from around the Navy hosted an enlisted round table luncheon to discuss issues and gain insight to help the Sailors of the surface Navy. The luncheon ended with remarks by Navy Master Chief Petty Officer of the Navy Steven S. Giordano.

“As we prioritize readiness and change how we apply fire power and how we fight, the most important component of just how effective we will be, tomorrow and well into the future, is of course our people,” said Vice Chief of Naval Operations, Vice Adm. Bill Moran. “When I say people, I mean Sailors, Navy civilians, engineers, yard workers, academia, industry. Together they form the Navy’s asymmetric advantage.”

The Surface Navy Association was incorporated in 1985 to promote greater coordination and communication among the military, business and academic communities who share a common interest in naval surface warfare and to support the activities of Surface Naval Forces.

The SNA symposium will continue through Jan. 12. View the symposium live stream on the Navy Live blog at http://navylive.dodlive.mil/2017/01/09/sna-national-symposium-distributed-lethality-enabling-sea-control/ and join the conversation of social media using #SNA2017.