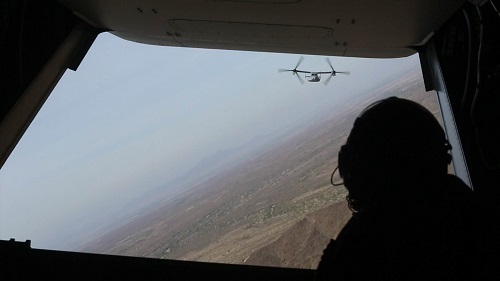 Seahorse Wind is a long-range raid exercise where assault-support aircraft transport ground units from one location to a simulated combat zone. Exercise Seahorse Wind is a crucial component to exercise Steel Knight, a larger exercise meant to test the capabilities of Marines and sailors.

Exercise Steel Knight is an annual exercise lead by the 1st Marine Division that spans the western United States and California coast. Focusing on ground fires, maneuver warfare tactics and command and control capabilities, this exercise tests Marines and sailors across a range of environments and against a thinking opposing force, which ensures that the 1st Marine Division is the Marine Corps’ largest, most capable and most lethal combat force in readiness.

Planning and executing a mission of this scale takes months of preparation, whether that be planning the exercise or actually executing it while returning home safely, according to Lt. Col. Jackson Doan, commanding officer of 3rd Battalion, 5th Marine Regiment.

On Dec. 1, the Marines participating in the exercise ran through a simulated version of the mission at Marine Corps Air Station Camp Pendleton, California. On Dec. 4 – 5, the Marines were preparing their gear and a couple days later, the Marines loaded up and took off on their four-day long full-scale exercise on Dec. 6.

During the exercise, the 3rd MAW Marines trained with ground troops and infantry Marines participated in a large-scale mission similar to the ones executed in Iraq and Afghanistan, according to Capt. Andrew Lundskow, a Viper pilot with HMLA-169.

“For the individual Marine this exercise is important because it provided them the opportunity to perform a long- range raid exercise, which we don’t get the chance to do that often,” said Lt. Col. Rafael Candelario, acting regimental commander of 3rd Bn., 5th Marines.

The ground Marines engaged multiple simulated enemy outposts while simultaneously calling in air support from AH-1Z Vipers with HMLA-169 in order to continue their mission successfully once they were on the ground.

“This is a rare opportunity for us to come together with ground troops outside of the Integrated Training Exercise (ITX) and to actually train how we fight,” said Lundskow.