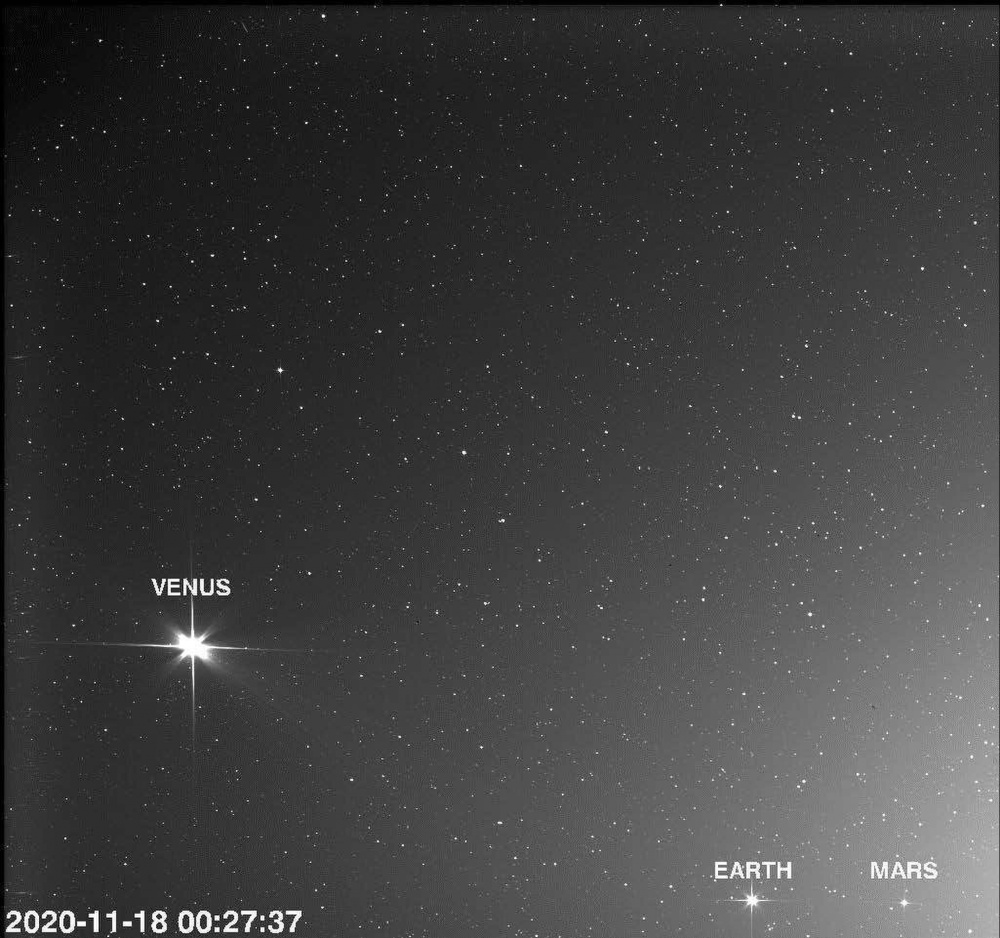 The image captured more than the local neighborhood; it also captured the ice giant Uranus which was more than 1.7 billion miles (2.7 billion kilometers) from the orbiter.

The original video visibly shows Venus, Earth, & Mars moving against the stellar background as the spacecraft & planets moved on their orbits. It was not until ESA/NASA posted the imagery and video online that celestial detectives worldwide posed the question, was Uranus also captured in the footage.

“We commonly observe multiple planets in NRL’s other space-based instruments that are near Earth,” said Robin Colaninno, Ph.D., U.S. Naval Research Laboratory SoloHI principal investigator. “We did take an image of Earth with the WISPR instrument on the Parker Solar Probe. However, Solar Orbiter is far away from Earth, so it is rare to have a picture with Earth and other planets.”

NRL’s SoloHI camera is the heliospheric imager for the ESA and NASA Solar Orbiter. The mission provides unique observations of heliospheric plasmas, determining the 3D electron density and velocity structure of the inner heliosphere and how it spreads out to one Astronomical Unit (AU), about 93 million miles (150 million kilometers) from the Sun.

“SoloHI is designed to look at the solar wind and coronal mass ejections far away from the Sun,” Colaninno said. “We were not expecting to see the planets in this data, so it is a nice surprise.”

Solar Orbiter is a collaboration of 20 countries for a payload of 10 scientific instruments. While NASA provided other instrument components, SoloHI is the only wholly American instrument onboard. The heliographic imager, a specialized camera that captured the celestial neighbors, was developed at NRL.

Solar Orbiter was launched in February 2020 and released its first images five months later, the closest-ever pictures of the Sun taken to this date. Currently, as it spirals closer inwards, the equipment onboard continues to be fine-tuned before beginning routine operations in November 2021.

Solar Orbiter was on its way to Venus for its first gravity assist flyby when the recording was captured. These Venus and Earth flybys help bring the spacecraft closer to the Sun and tilt its orbit to observe the Sun from different viewpoints.

Kai Noeske, Ph.D., ESA Science Programme Communication Officer, summed it up saying, “It’s quite a unique perspective to ride along on a spacecraft on its way through the inner solar system, traveling to never before visited vantage points of the Sun, looking at the different worlds, including the one we call home.”

About the U.S. Naval Research Laboratory
NRL is a scientific and engineering command dedicated to research that drives innovative advances for the U.S. Navy and Marine Corps from the seafloor to space and in the information domain. NRL is located in Washington, D.C. with major field sites in Stennis Space Center, Mississippi; Key West, Florida; Monterey, California, and employs approximately 2,500 civilian scientists, engineers and support personnel.