ARLINGTON, Va. (5/14/13) – With the economy continually changing, and many finding themselves out of work, National Guard members who may find themselves unemployed have a number of resources within the Guard to assist with finding a new job.

“We have a few national programs,” said James Lamback, chief of the Employer Support Branch at the National Guard Bureau. “We also work to support the adjutants general in each of the states with their own specific programs.”

One of the most successful programs available to Guard members, said Lamback, is the Hero to Hire program, which links Guard members with employers who have agreed to give preference to those in the Guard and reserve.

“That has been very effective,” said Lamback, adding that one of the reasons the Hero to Hire program has been successful is that rather than acting simply as a database of employers with openings, those who use the program are assigned a case manager to work with.

The case management element of the program is important, as it allows for a tailored search for the individual Guard member, said Lamback.

“Some of our unemployed Guard members in particular have not had a job previously because they came out of high school, then they deployed and they came back,” said Lamback. “They are probably more suited to an application, rather than a resume. That’s where we get into the case management aspect (to determine that) and we think that’s absolutely important.”

The program has a multi-faceted approach as well, which adds to the success, Lamback said.

“They have the case management (part), they have the website itself and then there is a mobile job store that goes around the country that has also been highly successful,” said Lamback. “We think that triad makes for a successful venue for folks that are looking for employment.”

In addition to the Hero to Hire program, there are several other programs that Guard members can take advantage of. The Drive the Guard program works to link Guard members with careers in trucking and hauling and, said Lamback, adding that there are other similar initiatives underway that work to provide civilian credentialing for a Guard member’s military skills.

One of those credentialing programs allows Guard members with military jobs in information technology to obtain civilian certifications.

“It gives the National Guard the ability to put in Soldiers and Airmen that hold IT-related jobs to get (civilian) IT credentialing at no cost,” said Lamback. “It will give some folks some great opportunities. It doesn’t assure an individual of a job, but with the appropriate credentials it puts you in the fast lane to get those positions.”

The key, said Lamback, is finding jobs at the local level. Part of that means working with the adjutants general in the each of the 54 states, territories and the District of Columbia.

“The National Guard Bureau funds 55 program support specialists, they’re out in the states, and they are our key linkage to the adjutant general community,” said Lamback. “Those folks are the adjutant general’s chief advisor on employment and employer support.”

And it’s through the support specialists that programs are tailored to fit the specific state or region.

“We don’t see a one-size-fits-all approach,” said Lamback. “What we like to do is present models for the adjutants general and leaders to take a look at and combine those to fit their needs. It’s important that we localize it. Our key is that we want to have our Guard members working in the communities they serve and contributing to those communities.”

Those program support specialists also work within the local area, often partnering with other agencies and organizations, to assist Guard members with finding employment.

“A lot of what we do is networking,” said Lamback, adding that many of the programs available have had an effect in getting Guard members into jobs.

“We’re making a difference, there’s no doubt about it,” Lamback said. “We also have a commitment to take care of our folks and that’s important. We don’t want anybody falling through the cracks and part of mental well-being is employment. It plays a critical role. “

For more information on local job programs or opportunities contact your local employer support specialist or visit the Hero to Hire website at http://www.H2H.jobs. 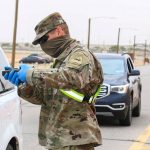 APRIL 8, 2020 – Defense Department personnel and their families — military and civilian — are urged to wear face masks during the COVID-19 pandemic, a Defense Health Agency official said. “The Department of Defense urges individuals on DOD property, installations and facilities to wear cloth face coverings when a 6-foot social distance cannot be […]