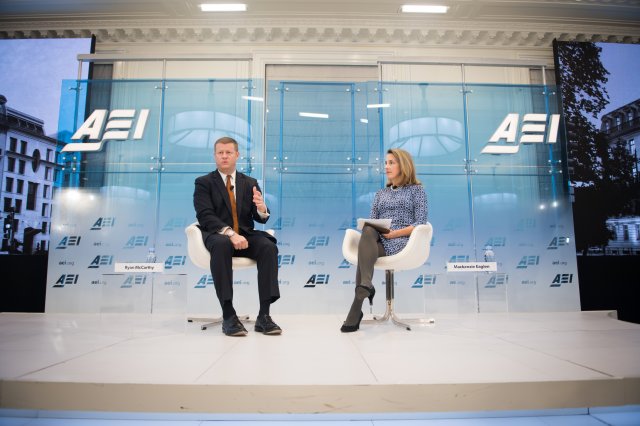 NOVEMBER 25, 2019 – As Congress passed another continuing resolution Thursday to keep the federal government open until Dec. 20, Secretary of the Army Ryan D. McCarthy said the lack of long-term funding is having a detrimental impact on operations, readiness, maintenance and modernization.

With no approved fiscal year 2020 budget, the Army had to freeze about $3.5 billion in modernization funds, which impacts close to 80 new programs, and about 40 production-line increases, McCarthy said during a presentation at the American Enterprise Institute.

“From a readiness standpoint, we are very concerned. We need to get [the budget] turned back on as quickly as possible,” he said.

Expenditures in operational maintenance had to be reduced by 2%, McCarthy said. The buying power of battalion and brigade commanders is declining, which means fewer spare parts and not as many training repetitions.

“Time is the variable that you don’t get back,” he said. “Even if you get the [budget after Dec. 20], you just lost 90 days. In our business, you got to get every repetition before we get on an airplane and go do the nation’s business.”

FY 21 BUDGET TO CONTINUE MODERNIZATION
The lack of an approved FY20 budget has not stopped Army senior leaders from putting final touches on the fiscal year 2021 budget proposal, McCarthy said. Readiness, modernization and people continue to be the Army’s top priorities for FY21 and the fiscal 2022 spending plan, he said.

“Over half of our balance sheet is focused on people and training,” McCarthy said. “What you will see over the course of this next year is a focus on strategic readiness … [to include] emergency deployment readiness exercises for brigade-sized elements to Europe and East Asia, and the Defender series [of exercises].”

The Army is also in the midst of a significant transformation with the launch of the modernization enterprise, McCarthy said. In turn, the Army looks to “finish what it started,” all while maintaining a level of trust and commitment between the force and the Office of the Secretary of Defense, Congress, industry, and other key stakeholders.

“We worked very hard to communicate … our intent,” said McCarthy, during an engagement at the Thursday. “One of the greatest things I think we did — we published a modernization strategy and then we put the money against [that priority].

Last fiscal year, the Army moved over $40 billion to help develop 31 signature systems across the force’s six modernization priorities, he said. The force is slated to receive a wide range of prototypes over the next two years.

To pay for new technology, the Army has already backloaded funding in its five-year spending plan, McCarthy said, but added leaders will still need to engage in future “night court” processes to reshape the Army’s balance sheet to completely fund future projects.

“If we’re successful in these next 18 months and these prototypes deliver, you are going to need a lot of money to start bringing [in] … hundreds of these widgets into the formations,” he said. The future year’s defense plan “helps Congress manage expectations. It allows us the time to see if the stuff’s going to work and then collectively come together and make an adjustment downstream.”

NEED FOR TEAMMATES
While people are, and will always be the Army’s most precious resource, the Army has recently seen an alarming increase in reported suicides and sexual assaults, McCarthy said.

“There are things that are tearing away the fabric of our institution. The only way that we can think of doing better is just by being better teammates,” he said.

McCarthy and Army Chief of Staff Gen. James McConville are trying to set the example by exhibiting the right behaviors that help build a cohesive team. The two often eat lunch or workout together, McCarthy explained.

“Teammates look each other in the face — teammates invest in each other,” McCarthy said. “Some of those simple fundamentals of investing time in each other will help you improve and … understand who you’re dealing with, so when [a teammate] has challenges, you are there for them.”