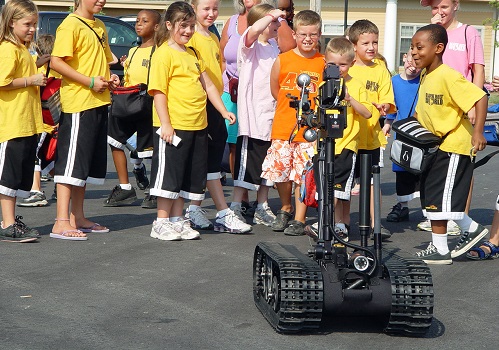 The distance, or standoff, away from explosive ordnance can be a matter of life or death. With the Remote Fuse Disassembly System, standoff can now reach a distance of 50 feet.

“With the last system, we were much closer,” said Staff Sgt. Jonathan Snow, an EOD technician with Naval Service Warfare Center, Explosive Ordnance Disposal, Technology Division, Marine Corps Detachment. “We had to build a wall around the blast shield with sandbags, and we were about ten feet away.”

During the class, the students got a chance to handle the new technology, which includes robots that control the Remote Fuse Disassembly Unit’s actions.

Sgt. Timothy Gilson, an EOD technician with 9th Engineer Support Battalion, 3rd Marine Logistics Group, III Marine Expeditionary Force, noted some of the new system’s pros and cons. He explained that it’s safer, since EOD technicians can now operate farther from ordnance; however, the distance also diminishes the technician’s feel for the mechanical process of disassembling a fuse.

“We can now monitor all of our motions remotely through our robots,” said Gilson. “With the new system, you can’t feel the drill going in, but now we can see how far we’ve drilled into something from a distance with our cameras.”

The whole machine is consolidated into four boxes. The class unpacks them and assembles the unit to begin gaining experience.

“It’s a two-part system, but it has some extra components as well,” said Snow. “We can turn metal just using the lathe apparatus. There’s also a mill head so we can use it for milling operations and a pressing module to press out pins or dents.”

Mrs. Regina Washington is a program analyst with Marine Corps Systems Command based out of Quantico, Virginia and attended the classes as a subject matter expert.

“This unit in particular was strongly suggested to be updated by the Marine Corps because they do the most inserting, which is going into the fuses in explosive ordnance to see how it works,” said Washington. “The Marine Corps has 62 out of 75 total units made.”

The Remote Fuse Disassembly System will be the unit that the Marine Corps will utilize from now on and is designed to make explosive ordnance disposal safer.

“It’s crucial to III MEF because it gives us the ability to exploit not only foreign ordnance but U.S. ordnance as well to help protect us and people in the field,” said Snow. “If people out in the field better understand ordnance because of what we do here, it’s going to keep everybody that much safer.”