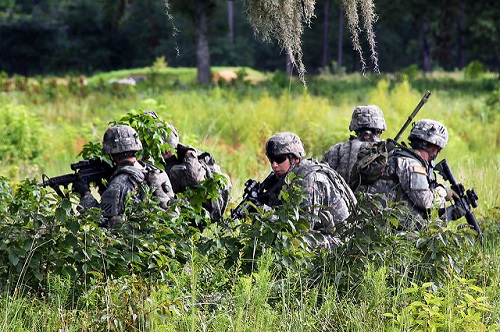 JULY 7, 2017, WASHINGTON – Over the past 15 years, the Army has rightly focused on winning the current fight, said Maj. Gen. Wilson Shoffner, director of operations for the Army Rapid Capabilities Office, known as the RCO.

During that time, however, the nation’s adversaries have invested in technologies in an attempt to gain parity. The rate of technological change has also encouraged the Army and sister services to stay ahead of any potential capabilities gaps in critical areas. The RCO seeks new approaches to these problems to ensure that the Army remains prepared for future challenges, Shoffner said at the Association of the United States Army’s Hot Topics seminar “Army Sustainment,” June 29.

Two ongoing efforts at RCO include work on electronic warfare technologies, and positioning, navigation and timing, known as PNT. The RCO is on track to produce PNT prototypes for use in Europe later this year, he said.

For instance, the 2nd Cavalry Regiment in Europe is using electronic warfare prototypes to carry the fight into the electromagnetic spectrum. According to Shoffner, the regiment is now using a new technology pushed by RCO, known as Counter UAS Mobile Integrated Capability.

This technology involves taking two Stryker fire-support vehicles and adding electronic warfare capability to them, including the AN/TPQ-53 lightweight counter-mortar radar. The system can detect threats and counter them with an electronic attack, Shoffner added.

These prototypes are not programs of record, he said, explaining why they were fielded in a matter of months. The prototypes are currently being tested by Soldiers until full capability can be achieved, and while they might not be a perfect solution, even an 80 percent solution is better than nothing, according to Shoffner. The concept of the test period is to “place multiple small bets without spending a lot of money and be OK with some of those not working out,” he said.

Although RCO assumes a fair amount of risk in whether or not a product works the way it is intended to work, Shoffner explained that the organization takes no risks when it comes to Soldier safety. “We’re using safety releases from the Army Test and Evaluation Command and urgent materiel releases from Army Materiel Command before fielding a prototype,” he said. “So there are protocols followed to ensure we’re not taking excessive amounts of risk.”

When Shoffner was in Europe three weeks ago, he observed leaders at the company and platoon levels thinking through how to employ the EMS and PNT equipment.

These small-unit leaders are operating in a much more complex environment than they did in Iraq and Afghanistan, he said. “They have to know what the threat is, where it is and what combination of capabilities to use in order to follow the commander’s intent.”

The RCO partners across the acquisition community as well as the operations community, Shoffner said.

He pointed out that the RCO works closely with program managers, sharing feedback from the Soldiers who use the prototypes in order to better inform the program managers’ current and future programs of record.

“We work with the program managers and life-cycle management commands as we go so they’re involved from the beginning,” he added. “We understand that the prototypes will inform decisions and in some cases become programs of record, so it’s critical to think through the sustainment piece from the very beginning and partner with the logistics community working hand-in-hand from the very beginning.”

Beyond PNT and EMS, Shoffner added that the Emerging Technologies Office, a cell within RCO, is researching technologies that could be developed to counter “threat technologies that may be evolving or changing so that we don’t get surprised five years down the road when our focus was elsewhere.”

Autonomous and semi-autonomous systems are examples of current research, he said.

Another area ripe for experimentation, he said, are systems that could defeat anti-tank guided missiles. “What if there’s a way to detect, disable or defeat them through electronic attack or directed energy?” Shoffner commented. Such an approach would not only mitigate risk, but would also ease logistics burdens since units would not have to haul around conventional munitions.

Joshua Marcuse, executive director of the Defense Innovation Board, applauded RCO’s efforts, especially in the light of RCO’s efficient work. Compared to the entire defense budget, RCO’s portion is small when evaluated against the products and capabilities that it produces.

He added that it is of critical importance for RCO to receive the necessary financial and technological support it needs to fulfill its mission to move products quickly to the field to protect and equip Soldiers against emerging threats.