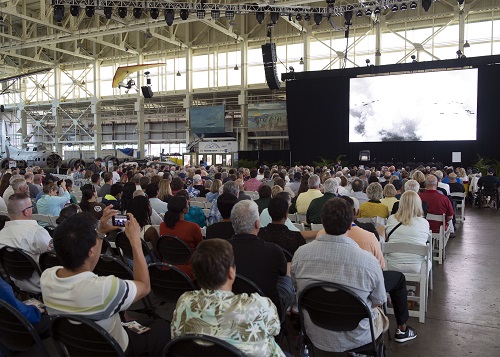 DECEMBER 6, 2016, PEARL HARBOR (NNS) – Pearl Harbor survivors, family members and visitors watched the premiere of “Remember Pearl Harbor” in silence as they paid tribute to its honored guests, the survivors of Pearl Harbor, at the Pacific Aviation Museum, Dec. 4.

The World War II Foundation’s film focused on the personal stories of those who served in Pearl Harbor on Dec. 7, 1941, or those who witnessed the events that took place that day.

Four survivors of USS Arizona attended, as well as two Medal of Honor recipients, Hershel Woody Williams and Gary Littrell. Also in attendance were the oldest survivors of Pearl Harbor, Ray Chavez, 104, who served as a seaman first class on USS Condor and James Downing, 103, who served as a postmaster on USS West Virginia.

Daniel Martinez, chief historian of World War II Valor in the Pacific National Monument in Hawaii, spoke in the film about the events of Pearl Harbor.

“Pearl Harbor is the touchstone of history,” said Martinez in the film. “It’s where World War II began for the United States.”

Among the visitors was Petty Officer 2nd Class Kevin G. Smith, of Frederick, Maryland, who planned the trip to the 75th Pearl Harbor Commemoration events five years ago.

Smith proudly displayed a document from the 2010 National Pearl Harbor Remembrance Day. A document he had signed by seven Pearl Harbor survivors.

During his current visit to the island, Smith said he was able to meet USS Arizona survivor Donald Stratton, a moment he felt honored to have been a part of.

In the film, the survivors expressed what they would like everyone to remember: who they were, what they witnessed and the men and women who lost their lives, were injured or went missing on December 7, 1941.

“Remembering,” however, was not lost on Smith. “We need to keep this history alive so the next generations can understand the importance of honoring those who served and remembering the events so that the same mistakes aren’t made in the future.” 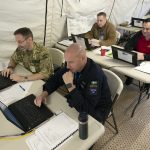