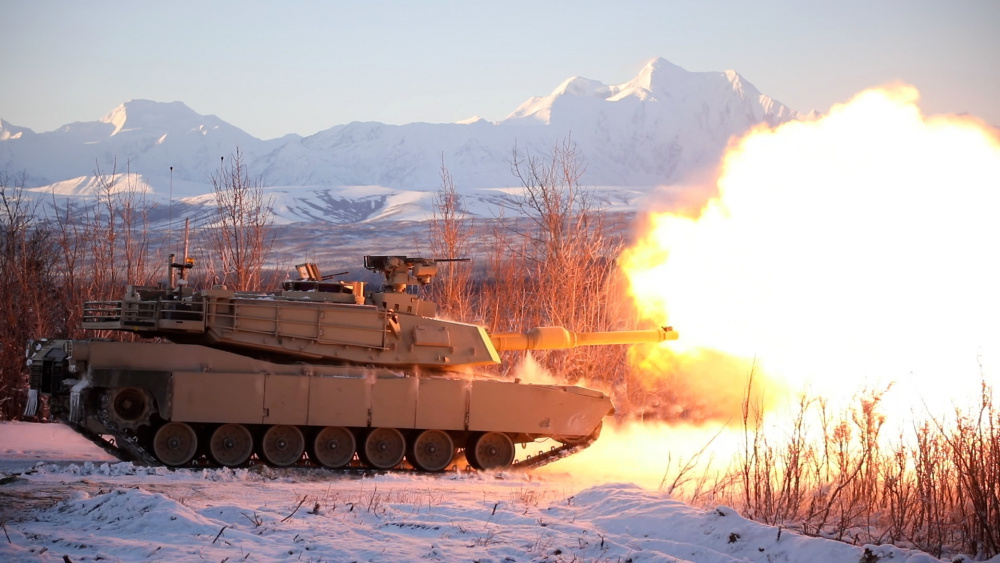 MAY 4, 2021 – What has outstanding offensive and defensive capability and represents the aweing tip of the spear in a major land war?

It’s the M1A2 System Enhancement Package (SEP) version 3 (v3) main battle tank, which wrapped up extensive cold-weather testing at U.S. Army Cold Regions Test Center (CRTC) this winter to ensure it functions as it should wherever in the world it could be called on to serve.

Since testing at the Department of Defense’s lone extreme cold natural environment testing facility began in January 2020, the SEPv3 was driven more than 2,000 miles in rugged conditions across three seasons of sub-Arctic weather, fired hundreds of rounds for accuracy in extreme cold, and underwent testing of its auxiliary power unit, as well as numerous other sub-systems.

The list of improvements to test in the SEPv3 is lengthy: improved fire control electronics mean the SEPv3’s gun can shoot faster and more accurately; the armor has been improved; it can even utilize hubcaps and road arms manufactured with a 3D printer. Onboard diagnostics are much more robust, and technical manuals can be accessed from removable screens.

Though the platform was extensively tested at Yuma Test Center prior to being put through its paces in Alaska, the sub-zero temperatures brought forth glitches that would have been unimaginable in the desert.

“While we were doing the main weapon firing, we ran into a system issue where we weren’t able to fire,” said Elissa Palm, test officer. “After some pretty extensive troubleshooting, we were able to work with the product manager to identify a fix. We were able to prevent non-mission capable tanks from being fielded and implemented the fix across the fleet, then validated here with additional testing.”

Conducting evaluations in the extreme cold of an interior Alaskan winter usually brings unexpected challenges even for the rugged professionals of CRTC, and this test was no different. One night, overflow ice from the nearby Delta River flooded the gun position, then quickly refroze rock-solid.

“We had one of the portable latrines with ice that was hip-high: you weren’t going to move it until it got melted,” said Greg Netardus, Chief of CRTC’s Test Operation’s Division. “All of the equipment was frozen in: wheeled vehicles carrying the ammunition would not have been able to maneuver down there. It was not safe to put people down here.”

CRTC’s vast expanse includes other ranges that could be utilized, but not ones that had important infrastructure that the testers needed.

“We don’t have multiple ready-to-fire ranges with targets at known distances for the tank, so our Allied Trades shop did a really nice job in a very short time building a new mobile target based on a Conex and getting it set up for us,” said Palm.

The target that CRTC’s Allied Trades shop had to recreate on the fly consisted of tall poles upon which a target is pulled into place with a hand crank. The fixed target is emplaced in the ground, which required approvals for work and brush clearance prior to construction.

“We used a 40-foot ISO container as a base, so there was no dirt work or anchoring required,” said Sam Porter, CRTC’s Allied Trades Lead. “An ISO container meant we could build it off-site in the shop, where we had cranes and a man lift. We took the design of the target that was in place and modified it.”

The mobile target was re-used in the summer, and provides a flexible new capability for future tests.

“With this, they should be able to set it up and utilize wherever they are able to fire that gun,” said Porter.

To take advantage of the coldest temperatures possible, weapons firings were oftentimes conducted in the small hours of the morning. Possibly the most difficult testing challenge, however, occurred earlier in the calendar year: when the COVID crisis hit in March 2020, eight members of the testing team who had come to CRTC from Yuma were especially impacted by sudden restrictions in travel and new temporary duty (TDY) authorizations.

“A lot of times on these long-term tests, we like to trade people in and out so they can get back to their families,” said Palm. “This time it was really hard for us to get TDY approvals, so the crew was great in that most of them volunteered to stay until the end of the effort.”

The M1 and its variants have been tested at U.S. Army Yuma Proving Ground and its constituent test centers for more than 40 years, and likely will continue to be for as long as the system remains in the ground combat arsenal. This testing has played a vital role in keeping the M1 the most capable tank in the world.