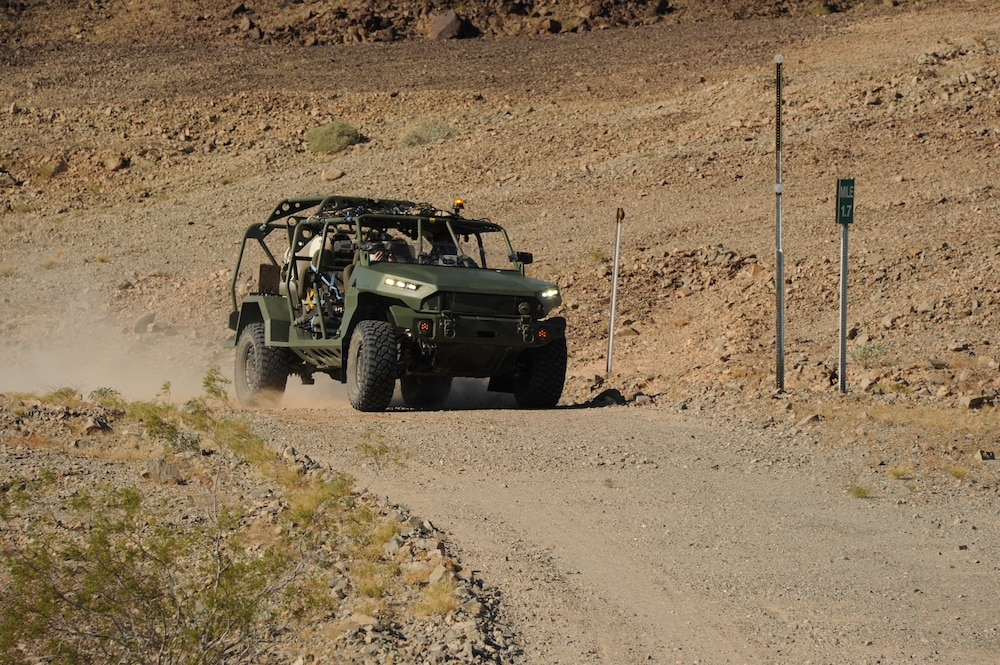 MARCH 16, 2021 – There’s a new vehicle turning heads on the range at U.S. Army Yuma Proving Ground (YPG), and it will likely begin arriving in Army brigades in a matter of months.

It’s the Infantry Squad Vehicle (ISV), and it promises to give Soldiers an opportunity to arrive to a fight faster, rested, and ready.

Powered by a 2.8 liter turbo diesel engine with a six speed automatic transmission, the four-wheel drive vehicle carries up to a nine Soldier infantry unit and their heavy gear. If it looks familiar, it is because the platform is based on a commercially-available vehicle.

“About 70% is common with the Chevy Colorado ZR2, and the rest is a mixture of commercial parts that you can modify and put onto the Chevy Colorado,” said Steve Herrick, product lead for Ground Mobility Vehicles. “About 90% of this can be bought on the commercial market.”

The ISV is meant to reduce the burden on infantry Soldiers weighed down by heavy gear and faced with rugged terrain. The fast and lean ISV can be air transported into locales within theater rapidly and efficiently.

“It provides an operationally relevant vehicle for a small tactical unit to be transported to a drop off point as quickly as possible in a mission-ready state,” said Sean Lamorena, test officer. “It’s intended to be transported by means of the infantry’s rotary or fixed wing aircraft platforms.”

“This vehicle is going to help Soldiers in the Infantry Brigade Combat Teams that currently walk everywhere,” added Herrick. “It’s made to be ‘a better boot,’ a capability that allows you to effectively change how you operate.”

Right now it’s being put through its paces across the more than 200 miles of rugged road courses at YPG to ensure it functions as it should wherever in the world it could be called on to serve.

Over the next few months, the ISV will traverse 5,000 miles across Yuma Test Center’s rugged ranges, including sand slope mobility tests that will see it tackle a sandy 30% grade—for perspective, the steepest grade on an interstate highway in the contiguous United States is 6%. Through much of the testing, the vehicle and its driver will be joined by plastic dummies weighted with sand in the vehicle’s remaining seats.

“We up-weight the vehicle to its operational weight expectation,” said Isaac Rodriguez, team leader in the Combat Automotive Systems Division. “We also install a data acquisition system that monitors GPS and the vital signs of the vehicle.”

During testing, simulated missions take the vehicle across road courses featuring various terrain conditions, from paved to gravel, to punishing desert washboard that would severely rattle a vehicle without four wheel drive. As they traverse these roads, test vehicle operators continually verify performance of all the platform’s performance.

“Yuma provides the capability of extreme weather differences, as well as a desert terrain,” said Herrick. “We can’t get those things that Yuma provides at other testing locations. The distances travelled on the courses and the weather conditions really help here.”

The rising temperatures as spring approaches will also help the testing.

“We’ll take advantage of the hot temperatures to execute cooling performance of the vehicle,” said Rodriguez. “We’ll load the vehicle up and verify that it is able to maintain its proper operating temperatures.”

Though the vehicle is manufactured by General Motors and the company’s desert proving ground is co-located at YPG, there are currently no plans to utilize their road courses in tests of the ISV.

“We have the capability to do so, but based on the scope of testing for this vehicle it isn’t necessary,” said Rodriguez. “If the customer added a requirement that would need to be done at that facility, we would certainly entertain that idea.”

Eventually, the Army intends to field 59 ISVs to each brigade, beginning with brigades within the 82nd Airborne Division in May. The testing completed at YPG is an important element of the success of this rapid adoption and deployment of the vehicle.

“Yuma’s got a great history of being a prolific and great test facility for all Army platforms, let alone other Department of Defense items,” said Herrick. “We couldn’t be happier coming to Yuma.”