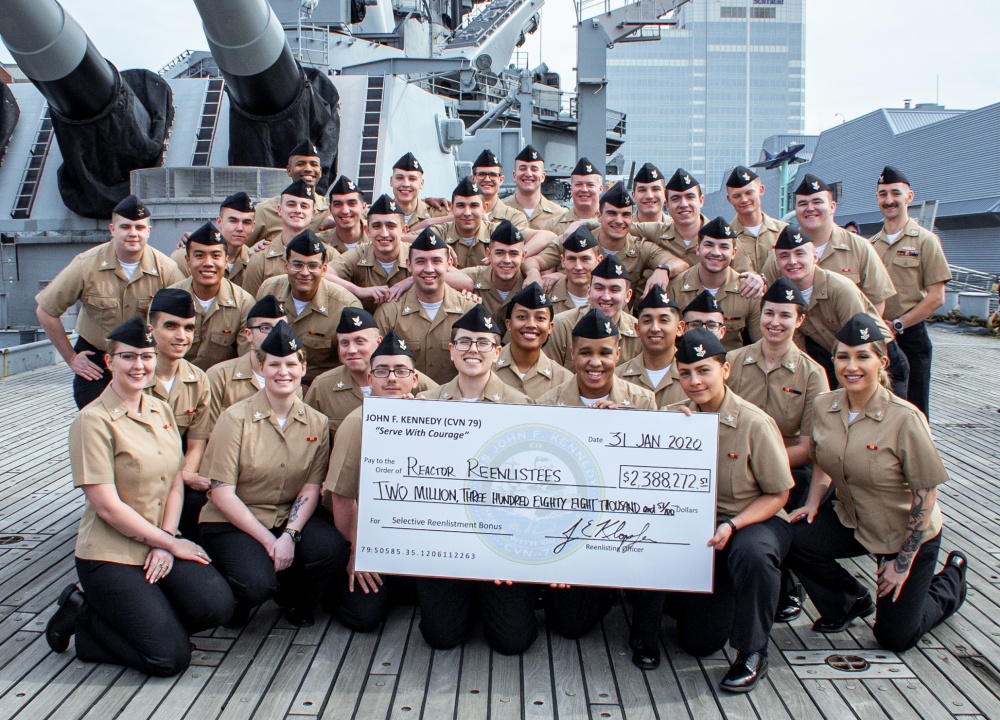 “Conducting a reenlistment ceremony for this many high-quality Sailors is definitely great news for our command and the US Navy,” said Capt. Todd Marzano, Commanding Officer of PCU John F. Kennedy, which is under construction. “I’m extremely proud to see these Sailors continue their naval careers and receive recognition for their hard work and dedication aboard PCU John F. Kennedy.”

“In keeping with the Navy’s total force integration, these programs further the training of our high-quality Sailors and reward them for their valuable contributions,” said Jones.

Master Chief Machinist’s Mate Gerrit Assink, Reactor Department Master Chief says the Sailors standing on the deck of the USS Wisconsin earned the bonuses based on the work they have accomplished and what they are expected to accomplish.

“This program is a good thing because being a nuclear propulsion plant operator is a challenging job which deserves a high level of compensation,” said Assink. “Compared to the work of a comparable operator in a civilian nuclear power plant, our Sailors work more and harder and get paid less.”

Assink says these Sailors are working long hours and studying around the clock. “Sailors are required to qualify up to seven different watch-stations and participate in a continuing training program that requires three hours per person per week and a monthly written exam.”

The idea of the mass reenlistment onboard the USS Wisconsin was born from a shared idea says Jones.

Machinist Mate (Nuclear) Second Class Miranda Mistalski was one of the first to be pinned and is proud to continue her naval career.

“I get to get some more qualifications on the ship, which gives me more opportunity in the civilian world, so I’ll be able to do more. I can finish my college degree, or get my masters and get more degrees, so it helps me in the long run,” said Mistalski.

CVN 79 is the second aircraft carrier to honor John F. Kennedy for his service to the nation, both as a naval officer and as the 35th President of the United States. CVN 79 incorporates more than 23 new technologies, comprising dramatic advances in propulsion, power generation, ordnance handling, and aircraft launch systems. These innovations will support a 33 percent higher sortie generation rate at significant cost savings when compared to Nimitz-class carriers. The Gerald R. Ford-class also offers a reduction of approximately $4 billion per ship in life-cycle operations and support costs, compared to the earlier Nimitz class.

The new technology and warfighting capabilities that John F. Kennedy brings to the fleet will transform naval warfare, supporting a more capable and lethal forward-deployed U.S. naval presence. In an era of great power competition, CVN 79 will serve as the most agile and lethal combat platform in the world, with improved systems that enhance interoperability among other platforms in the carrier strike group as well as with the naval forces of regional allies and partners. 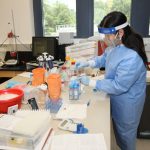 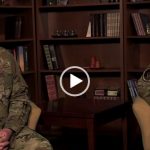 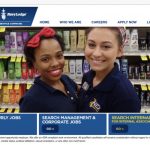 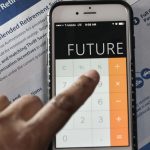