SEPTEMBER 13, 2021 – Department of the Navy (DON) civilian employees who are killed or sustain serious injury through considerable personal sacrifice in the performance of their duties are now eligible to receive the Angela M. Houtz Medal for Fallen Civilians.

The award honors the fidelity and essential service of civilian employees who were killed or sustain serious injury in the performance of their official duties as a result of criminal act, natural disaster, terrorist act, or other circumstances as determined by the Secretary of the Navy (SECNAV).

“While Department of the Navy civilians may not be on the front lines, they do face many of the same dangers as our uniformed personnel because of where they work and what they do,” said Mr. Garry Newton, the Deputy Assistant Secretary of the Navy for Civilian Personnel. “It was long past time to make it possible for commanders to fully recognize the service of all department personnel.”

The medal is named for Angela M. Houtz, a DON Intelligence Analyst, who perished during the terrorist attack on the Pentagon on September 11, 2001.

“The recognition the Navy is giving Angie by naming this medal in her honor is an unexpected and overwhelming gift to our family,” said Julie Shontere, Houtz’s mother. “Twenty years after she was killed – her presence is still being felt, her spirit and dedication still remembered, her contributions to the Navy as a civilian still recognized.”

Shontere said she and her husband Joe Shontere, Houtz’s father, were thankful to the Navy “and everyone involved in the process of establishing such a special remembrance of our incredible Angie.”

Houtz’s dedication to service and outstanding moral character are exemplified in a written note found in her desk which highlighted the way she lived her life:

“Considered a ‘shipmate’ by her Navy co-workers, Ms. Houtz’s dedication to service and the Navy makes her an appropriate namesake for this award,” said Cox. “I can attest to her reputation as an exceptionally dedicated and talented Intelligence analyst and civil servant, who displayed uncommon potential for senior leadership. She might one day have been a Deputy Director of Naval Intelligence.” 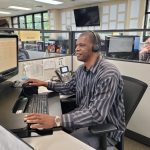