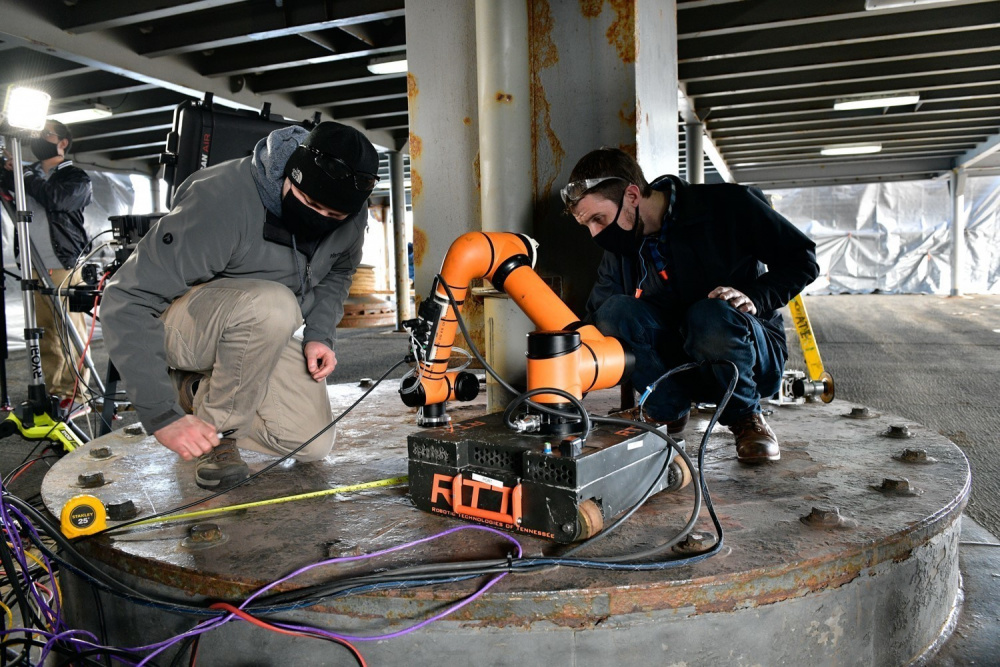 NAVSEA 05T is sponsoring the Multifunctional Automated Repair System (MARS) project, which is aiming to use the robot to do certain maintenance and repair tasks aboard Navy ships, including surface restoration, lidar (laser) scanning, grinding, plasma blasting (paint removal system), cold-spraying, and ultrasonic and electromagnetic Eddy Current inspection methods. The machine base is a modified and enhanced version of a robot created by Robotic Technologies of Tennessee, which builds mobile automated systems for welding, inspecting and testing tanks particularly for dangerous or expensive settings. NAVSEA 05T is partnering with Naval Surface Warfare Center, Port Hueneme Division (NSWC PHD), NSWC Philadelphia Division in Pennsylvania and NSWC Carderock in Maryland in addition to ARL on the project.

“The Multifunctional Automated Repair System will provide an automated portable system with surface preparation, repair and inspection methods for current and emergent facilities including forward-operating bases, ships and maintenance activities at shipyards,” said Carlos Boisselier, NSWC PHD’s Self Defense Test Ship systems engineer. Advantages of the robot include faster maintenance of ships and a new training aid for sailors, according to project members.

Recently, NAVSEA 05T and Penn State engineers spent three days live-testing and demonstrating a prototype robot and its capabilities on NSWC PHD’s Self Defense Test Ship while receiving valuable feedback from Navy sailors on modifications that will improve the robot’s performance and ease-of-use. NAVSEA 05T also sought direction on tasks the robot could perform from warfare centers’ engineers and experts; and warfare center activities will likely expand over time. Naval Undersea Warfare Center, Keyport Division in Washington, as an example, plays a significant role in the Navy’s cold-spray efforts.

Janice Bryant, NAVSEA 05T’s strategic technology manager and program manager for the project, is working hand-in-hand with engineers from Penn State ARL, which the Navy funds for technology development and implementation projects. Bryant and Tim Eden, head of the materials processing division at ARL, first penciled out the concept of the MARS on the back of an 8½-inch by 11-inch piece of paper in 2020 after discussing the Navy’s sustainment and repair needs.

Now watching the robot demonstrate its repair and maintenance tasks aboard a ship with Eden, Bryant said she is excited about the opportunities it can bring to the Navy in portability and emerging technology.

“The key advantage is portability—to be able to take maintenance out of traditional places and put it into new (locations) while a ship is underway—I think that starts to change the game,” Bryant explained. “The second advantage is this will start to change the way we approach new technology and integration; iterative development based on rapid, repeated fielding and user feedback ensures a viable, useful design.”

Bryant also envisions the robot expanding Navy sailors’ skills to include operating a robot as well as giving them more resources to conduct their everyday jobs and reduce the amount of manual labor.

“I’m hoping that it (the MARS) helps boost our personnel retention rate as we learn how to modernize maintenance with some of the new technology,” Bryant said. “We (hope) our workforce will be more willing to stay, and we’ll attract a new user—a next-generation mechanic or artisan—who learns traditional trades but with modern industry-4.0 type methods.”

The project also supports one of the three mission priorities outlined in NAVSEA’s Campaign Plan to Expand the Advantage 3.0 of “delivering combat power: On-time delivery of combat-ready ships, submarines, and systems,” because the new system will enable sailors to streamline ship maintenance, making the fleet more capable and mission ready.

In addition, the project aligns with the NAVSEA Technology Office which “champions the timely transition of emerging technologies into ships, submarines and the communities that design, build and maintain them—resulting in a more affordable and capable fleet.”

Eden added that training sailors to fully utilize how the robot acts is a new approach to training—one that will help the Navy make even greater technological advancements.

“The Navy will be able to integrate new technologies quicker because of our approach, which is developing and having training videos so the sailor can log on, watch the training video, run through some motions, and get a feel for how to operate the technology much quicker,” Eden said. “They don’t have to have someone come and teach them.”

After seeing the robot in action, Lt. Matthew Bogue, the officer in charge of NSWC PHD’s Self Defense Test Ship and its crew, agrees that the project is an excellent opportunity for the Navy to decrease ship downtime and get vessels ready for future missions quicker than before.

“I look at it (the robot) as something that will help with hull preservation on ships both in and out of dry dock,” Bogue said. “Being able to have a device that can grind and surface prep the hull without the costly process of building scaffolding or sending personnel over the side of the ship while in port saves both time and money.”

After observing the robot, Bogue zeroed in on the electromagnetic Eddy Current inspection methods and ultrasonic tools.

“There’s a lot of potential with the Eddy Current and the ultrasonic tools that they’re looking at attaching to (the robot) so you can actually determine the wear and thickness of the metal you’re preserving, because ships normally don’t have those resources available, or at least (not as) something they can bring on board,” Bogue said.

To make operating the robot more user-friendly for sailors, engineers modified a video game controller and connected it to the robot’s interface so the sailor can direct the robot’s movements easily. Anthony Naccarelli, research and development engineer for Penn State, is also working on the project and said the university’s Electro-Optics Center redesigned the software for this purpose. The project team also aims to eventually incorporate augmented reality into the system.

“One of our other engineers who works at the Electro-Optics Center, which is part of the Applied Research Lab, and his team completely gutted and redesigned the software for this system to make a new user interface with the video game controller so it’s intuitive for the sailor to use, which is something that was missing from the previous version of the system,” Naccarelli said.

Along with the robot’s easy interface for the sailors and a personalized and condensed training program, learning how to operate the new robotics system will provide sailors with opportunities for training on different topics—ultimately increasing their value to the fleet and Navy.

“There are a few different advantages,” Eden said. “One is the right training. You can have four or five different training modules and have a sailor who can perform five different operations using the robot, so you wouldn’t have to train five different people on those tasks. The sailors wouldn’t need to be experts in those areas, so they would perform the operations faster because one sailor could do five different jobs.”

Jason Bickford, NSWC PHD’s research manager, said the MARS project that assists the Navy with automated repair of its ships is a direction the Navy needs to pursue with significant investment.

“With the fielding of unmanned surface and subsurface vessels, the systems that are on our platforms will need maintenance, and anytime we can determine needed maintenance and execute it without human involvement will extend the operational cycles of those vessels,” Bickford said. “It will also reduce the manpower requirement along with the number of people standing by to jump on board and support maintenance on an as-needed basis.”

The program’s long-term vision is to make the robot and various components easy to transport to multiple ships where they are needed. The NAVSEA 05T and Penn State team envision utilizing a 20-foot Conex container that has everything the sailors would need to set up and operate the robot, according to Naccarelli.

After demonstrating the robot system with NSWC PHD’s Self Defense Test Ship and its crew, Bryant was happy with the feedback, and said the crew’s expertise will significantly contribute to the robot’s development as the project continues to grow and adapt to the needs of the Navy and the warfighter.

“I’ve been so amazed at the skill and expertise of everyone on this vessel; they have lots of years of maintenance experience, so it’s thrilling to talk to them and hear where they’ve been and what they’re doing,” Bryant explained. “You’ve got a whole bevy of unsung heroes here with such passion for what they’re doing, and the knowledge is just unreal. It’s a great place to learn from them.”

David Aaron, product support office fleet supportability manager for NSWC PHD, said this project could help the Navy tap into technology in a new way to solve problems sailors are regularly faced with, and he is eager to see its outcome.

“It’s exciting to see these kinds of tools and capabilities starting to come into fruition though an iterative development approach,” Aaron said. “It’s a stepping stone for the workforce, seeing what’s within the arc of the possible, and helping us to think bigger and start considering alternative solutions to some of the challenges facing the Navy’s maintenance and repair community.”