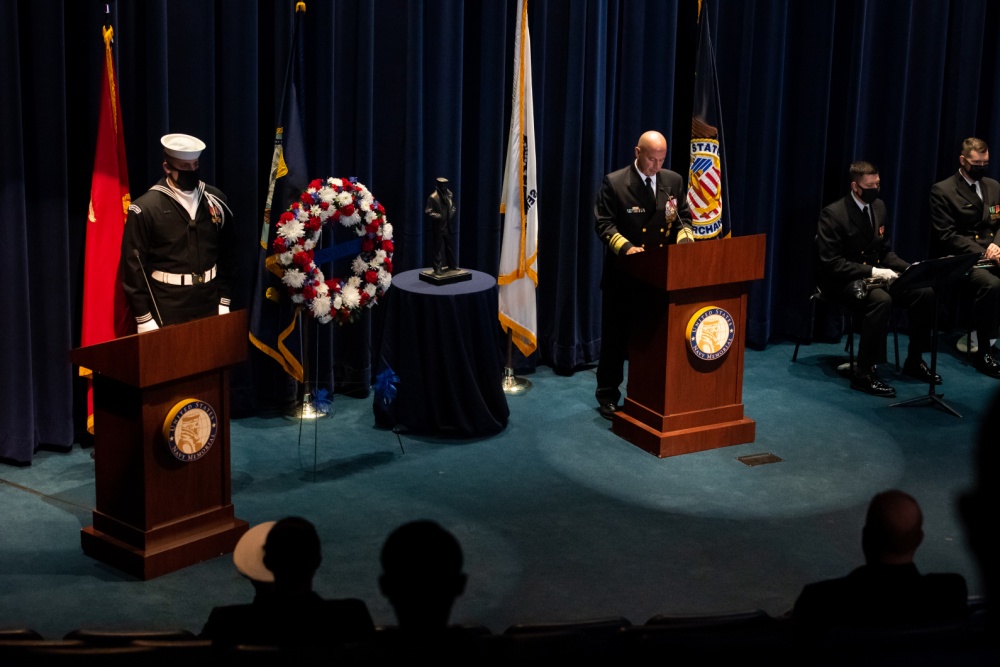 OCTOBER 13, 2020 – A wreath laying ceremony to commemorate the 20th anniversary of the attack on USS Cole (DDG 67) was held at the United States Navy Memorial Burke Theater in Washington, D.C., October 12.

The virtual ceremony recognized and celebrated the lives of the 17 shipmates who perished in the attack as well as the 37 others who were injured.

Vice Admiral James Kilby, deputy chief of naval operations for warfighting requirements and capabilities, was the guest speaker of the ceremony.

“Today we honor 17 heroes who gave their last full measure of devotion for their country,” said Kilby. “We come together to recognize the courageous and distinguished crew, determined warriors, who saved their ship and their shipmates from the brink of disaster. Today we gather to reaffirm our sacred bond with families, shipmates and friends of the fallen. We stand with you. We support you. We will never forget October 12, 2000.”

On Thursday, Oct. 12, 2000, Cole was the target of a suicide attack by terrorists while the ship was refueling in Aden Harbor, Yemen at approximately 11:18 a.m.. The explosion from the attack claimed the lives of 17 Sailors and injured another 37.

Chief of Naval Operations (CNO) Adm. Mike Gilday sent a message to the fleet, on Oct. 5, asking for a moment of silence today at 11:18 a.m. to honor the Sailors who died after the terrorist attack on the USS Cole (DDG 67) 20 years ago.

“The 17 Sailors who gave their lives that day are, no doubt, heroes”, said Gilday. “When their country called, they answered. And, for that, we are eternally grateful. Our responsibility is to honor them by remembering their sacrifices and ensuring they are never forgotten. The most powerful way to honor these sacrifices though, is our Navy’s continued demonstration of resolve in the face of threats to our nation and its citizens. For Sailors today, you should embrace your responsibility to honor the legacy of the Cole heroes. Their actions epitomized our Navy’s fighting spirit, heroism, toughness, selfless sacrifice, and tenacious resolve to never give up. They carried forward our Navy heritage of fighting with Honor, Courage, and Commitment. Using their example as a guide, I am confident our Navy’s proud legacy will live on for generations to come.”

The attack against the Cole was the deadliest on a U.S. vessel since the attack on the USS Stark in 1987, and one of the most significant terrorist incidents prior to 9/11.

Because of COVID-19 restrictions, the event was held with a limited number of guests including four members of the Cole. The event was also live streamed via the U.S. Navy Memorial’s website to provide an opportunity to those who weren’t able to attend in person.