Valiant Shield 2022 was a 12-day joint field training exercise (FTX) to enhance integration between U.S. military forces by conducting joint operations at sea, on land, in air, and cyberspace.

Members of the 119th Wing and 174th Attack Wing partnered to demonstrate the capabilities of the MQ-9 Reaper in an overseas location.

Pilots and sensor operators from multiple units also participated by flying the MQ-9 from ground control stations at bases in the continental United States.

“It’s the first time we have had the MQ-9 participate in dynamic force employment in the heart of Indo-Pacific Command, which makes this a significant exercise,” said a sensor operator of the 119th Wing.

With its extensive loiter time and sensor capabilities, the MQ-9 provides awareness that other aircraft cannot.

“One example of the MQ-9 providing maritime domain awareness for Exercise Valiant Shield was a simulated kill chain exercise where the MQ-9 was able to identify, target, and track the asset by using full-motion video and disseminating intelligence of a tier 1 target,” said 119th Wing MQ-9 Pilot 1.

“Without the MQ-9 being in this kill-chain exercise, it would not have gone well.“

“One of the key takeaways has been learning what it actually means to team-build,” said 119th Wing MQ-9 Pilot 2 participating in the exercise. “It has been incredible to see how the team has come together and succeeded in some very challenging tasks.” 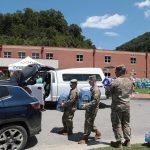