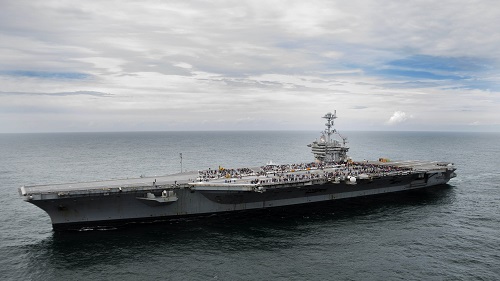 DECEMBER 13, 2016, ATLANTIC OCEAN (NNS) – In June 2016, Congress deemed November as National U.S. Navy Aircraft Carrier Month as a way to celebrate aircraft carriers and recognize the milestones and contributions aircraft carriers have made to the Navy, naval aviation, and national defense.

November was chosen because it has remained a significant month throughout aircraft carrier history. Here are a few highlights:

– November 14, 1910: Naval aviation was born when Eugene Ely launched from the deck of a U.S. Navy ship in a Curtiss Model D, an early United States pusher aircraft with the engine and propeller behind the pilot’s seat.
– November 5, 1915: Capt. Henry C. Mustin made the first catapult launch from a ship, beginning a century of technological advancements which led to today’s Electromagnetic Aircraft Launch System (EMALS).
– November 17, 1924: USS Langley (CV 1) converted from collier USS Jupiter (AC 3) and reported for duty with the battle fleet, becoming the first operational aircraft carrier in the U.S. Navy.
– November 25, 1961: The first nuclear-powered aircraft carrier, USS Enterprise (CVN 65), was commissioned.
– November 9, 2013: The first of the next generation of aircraft carriers, future USS Gerald R. Ford (CVN 78), was christened.
– November 14, 2013: USS George Washington (CVN 73) provides medical supplies, food, and water to the victims in the Philippines of Super Typhoon Haiyan.

As the carrier Navy has evolved over time, one thing has remained constant; aircraft carriers are a potent symbol of America’s strength in sea power superiority. They provide an important means of force projection from the continental United States to any area, no matter how hostile, and offer a floating platform to launch and recover aircraft.

“Our mission on the GW is to keep squadron pilots up-to-date,” said Chief Petty Officer Terrell Jones, Training Department leading chief petty officer. “We have to make sure they get all of their carrier qualifications, such as landings and takeoffs, just in case we are called to duty. We want to ensure we are prepared for whatever the mission requires.”

For Sailors like Jones, pride comes from interacting with those aboard.

“My proudest moments come from helping other Sailors,” said Jones. “I enjoy helping junior Sailors get their qualifications. Anytime I see Sailors growing, it makes me proud. You have so many chances to help other Sailors, from ship’s company to squadrons; it’s very rewarding. On a carrier, you have service members come aboard from other branches of service, [and] all of these circumstances provide opportunities for growth.”

Carriers have nearly every profession imaginable, including dentists, doctors, lawyers, firefighters, plumbers, and weather forecasters — much like a floating city. No warfighting vessel has more opportunities for Sailors to maintain their physical readiness, training, and career progression.

Sailors aboard carriers are able to partake in typical activities as they would on land by exercising in fully-equipped gyms, watching the latest movies in the theater room, and checking out their favorite reading material from the ship’s library. The great amount of resources available can help mold Sailors’ careers.

“Being stationed on an aircraft carrier helps a lot with supervisory positions,” said Petty Officer 2nd Class Donte A. Thomas, a Sailor aboard George Washington. “It’s better for evaluations because you have so many more Sailors under you. For instance, as an LPO (leading petty officer) you may have 60 Sailors that report to you; whereas on smaller ships such as amphibious ships or destroyers, you may only have 10. When you’re looking at becoming a chief, supervising a larger number of people than your counterparts really sets you apart.”

From August to December 2015, three carriers — USS Ronald Reagan (CVN 76), USS Theodore Roosevelt (CVN 71) and George Washington — participated in a three-hull swap. This experience allowed for a multitude of Sailors to share their experiences serving on carriers.

“We went to Chile twice and to Rio, and got a chance to work with a new team of Sailors,” said Jones. “This was unique because we had legacy GW Sailors working with San Diego Sailors to gel together for the mission. No matter what your rate was, you can always say you were a part of this historical event. Sailors from all three carriers were on this carrier at some point. This was the first time this type of swap was done in history.”

From historical moments to professional accomplishments, an aircraft carrier is the perfect place to create memories which will last a lifetime.

“I’ve been on four aircraft carriers, and the one thing I remember most about those tours is the people,” said Petty Officer 1st Class Reshawn Orr, of GW’s Air Department. “The work we do is important, but at the end of the day it’s about the camaraderie formed over time in the world’s finest Navy.” 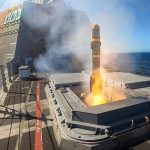