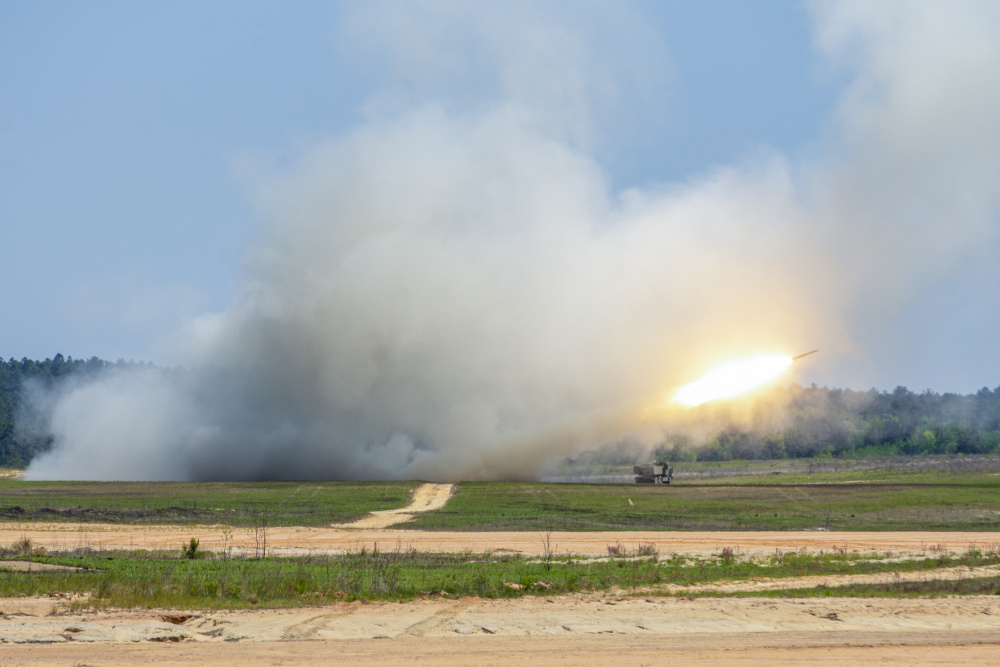 This iteration of the exercise has unique components that affected every subordinate unit in 10th Marine Regiment. This is the first time the Regiment was able to conduct fire missions with High Mobility Artillery Rocket Systems. This weapon system gives the Marine Corps a competitive edge against peer threats by providing longer-range and more precise fires capabilities than what is usually scene from the M777 Howitzer. HIMARS has been in use with 1st and 3rd Marine Division, but 10th Marines was able to temporarily acquire this system for Rolling Thunder 21.2, which allowed them to gain more familiarity with employing HIMARS as the force continues the modernization effort that will result in a large increase in precision fires assets across the Marine Corps. Romeo Battery HIMARS crew explained that they are rockets on wheels and they will make 2nd MARDIV and the Marine Corps more flexible.

“This training allows the Marines to try new things that will prepare them for fights now and into the future.” 1st Lt. Cordel Frovarp, 1st Battalion, 10th Regiment field artillery officer

“Currently we are shooting in support of the 23rd Marine Regiment as they execute EABOs against the 9th Mechanized Infantry Brigade,” said 1st Lt. Cordel Frovarp, field artillery officer with 1st Battalion, 10th Regiment. “This training is in line with the Marine Corps Force Design 2030, as we start to prepare for combat in anti-area access denial environments.”

In addition to the use of HIMARS, this is the first time Exercise Rolling Thunder utilized an Unmanned Aerial System. These systems provide the unit expanded capabilities in aerial reconnaissance and fires observation. Which increases situational awareness and act as a sensor for expediting decision making.

“We use an R-80D SkyRaider drone,” said Lance Cpl. Jacob O’Toole, an intelligence specialist with 1st Battalion, 10th Marine Regiment. “Marines should train with them more. They have a lot of capabilities such as plotting points, locating attacks and targets, and it can record and take pictures for briefings.”

Exercise Rolling Thunder is conducted twice a year for 10th Marines and its subordinate battalions to gain confidence and increase proficiency operating in austere environments. This year, 10th Marines was complimented by heliborne, fixed-wing, and unmanned aerial system support to provide expeditionary fires capable of rapid maneuver and employment in support of apex battalion task forces.

“This iteration is the first time 10th Marine Regiment has the ability to work with engineers and have them establish berms and cover that integrate with our battery defense.” says Cpl. Xavier Ortiz, a field artillery cannoneer with 1st Battalion, 10th Marine Regiment.

Marines received data from an observer that was extensively processed in a very short period of time. This process will result in the right prioritization of targets, the accurate and timely delivery of the right munitions to that target so the desired effect is achieved, and the assessment of those effects after the fire mission is completed. This process is critical to all forms of military maneuver, extensive training scenarios like Rolling Thunder 21.2 are crucial for preparing Marines.

“We are just part of a working body system,” Ortiz said. “The forward observers are the eyes, the fire support are the brains and we, the 0811s, are the muscle.”

Effective training and mission readiness were the end goals of the exercise. Exercise Rolling Thunder 21.2 is just another tool in 2nd MARDIV and the Marine Corps’ tool belt to achieve a more lethal and capable warfighting organization that is ready to fight against peer threats.