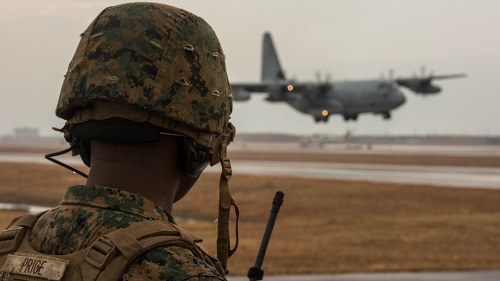 “MMT usually consists of six to eight Marines set to operate in a 72-hour environment by themselves . . . without support,” said U.S. Marine Corps Cpl. Chris Swogger, an air traffic control Marine with MACS-4 Detachment Bravo. “If we were in combat we would be able to establish an expeditionary runway. We go out and set up these runways, land and refuel aircraft, which allows us to further push into the country without having to take over airfields or build permanent structures.”

An MMT comprises of a base, pace, chase, reference, navigation aid and communication technician who establish a 60-foot wide and 3,000-foot long runway in remote locations during combat scenarios, medical evacuations or for humanitarian aid.

“The base Marine establishes the front end of the runway and is the ones in control talking to the aircraft,” said Swogger. “The pace Marine runs down the 3,000-foot landing zone and every 500 feet drops off a panel marking. The chase Marine follows the pace and sets up the left side of the runway. And the reference point Marine runs all the way down to the 3,000-foot marker and acts as the in-between for the base and pace, and allows the base to line up the runways with the reference point at the far end.”

The MMT Marines conduct this training every three to six months to refine the Marines’ skills, keeping them ready for expeditionary operations while in a garrison environment.

“MMT Marines are extremely important to our aircraft landing zone operations,” said U.S. Marine Corps Capt. Jeffrey Simonson, a KC-130J pilot with VMGR-152. “They are able to set up the strip to resemble what would be seen in a real-world scenario. The runway we use in Okinawa does not provide realistic training. The landing strip here in Iwakuni is much smaller, providing challenging and realistic training for the squadron. Each pilot has to conduct this training a minimum of once a year.”

“To be an instructor we have to go through MAWTS-1 and participate in a lot of the live-flying training with every type of aircraft the Marine Corps has,” said 1st Lt. Jeremy Graves, air traffic control officer with MACS-4 Detachment Bravo. “We learn our pace counts, how to set up an airfield, controlling aircraft in an expeditionary environment, and we work with all of Weapons and Tactics Instructor Course. It is a big event and a lot of training goes into it.”

Graves said the Marines will be conducting aircraft landing zone training quarterly and did well for their first time conducting this training on the air station.