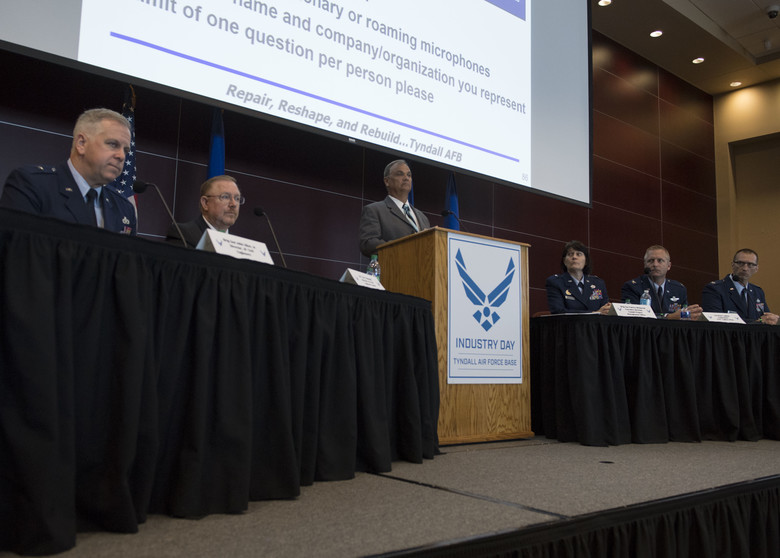 MAY 6, 2019 – John Henderson, assistant secretary of the Air Force for installations, environment and energy, reaffirmed the Air Force’s commitment to rebuild Tyndall Air Force Base during a symposium with industry representatives May 2, at Florida State University-Panama City.

Henderson told the more than 500 attendees that despite the absence of supplemental funding, the work to rebuild the Florida Panhandle base destroyed by Hurricane Michael in 2018 goes on.

Secretary of the Air Force Heather Wilson previously announced effective May 1 all new rebuilding efforts at Tyndall AFB and Offutt AFB, Nebraska, which was inundated with historic flooding in March, would stop without additional funding. She said the work stoppage would prevent new contracts from being started, including new rebuilding efforts. The stoppage does not apply to contracts already funded for clean-up and repair efforts.

“We have had tremendous support from the [Department of Defense], the administration and congressional members, but that has not translated into significant supplemental funding required to recover from the catastrophic damage caused by Hurricane Michael and the flooding in the Midwest,” Henderson said.

This was the second time Air Force officials met with industry to discuss the Tyndall AFB rebuilding plan. At the first Industry Day held Jan. 31, attendees received briefings about the damage to the base. Every building on the installation sustained some degree of damage and Air Force leaders want to collaborate with the private sector to include best practices and current construction trends in rebuilding Tyndall AFB as a state-of-the-art base of the future.

Brig. Gen. Patrice Melancon, Tyndall Program Management Office executive director, said the Air Force will rely on industry for the long-term repair and rebuild of close to 500 facilities damaged or destroyed in the hurricane.

“The Air Force knows there is much more technology available in the commercial arena and we asked for industry’s help to identify innovative concepts we can use for the reconstruction,” Melancon said. “We had 68 different entities that responded and submitted 98 white papers covering 132 concepts.”

The Air Force will use the best of those concepts going forward in planning base reconstruction. They’re grouped into six categories: smart basing, resiliency, master planning, design and construction, contract acquisition and program management. Ideas on smart basing and resiliency were prominent in the submittals. The PMO consulted subject matter experts at the office of the under secretary of defense for research and engineering, Air Force Civil Engineer Center and Air Force Research Laboratory for analysis of the white papers.

“Secretary Wilson recommended to Congress in December that we use supplemental funding to rebuild Tyndall [AFB] as the future home of three F-35 squadrons and the preferred alternative to host 24 MQ-9 unmanned aircraft,” Laidlaw said to attendees. “We need your help to rebuild not the base we had, but to rebuild the base we will need. Today we are getting missions done with short-term temporary fixes all across the base. We look forward to partnering with many of you as we look to transition from those short-term fixes to more long-term sustainable solutions.”

While the Air Force waits for additional funding, long-term rebuild plans are moving ahead. They call for multi-use, smart facilities able to withstand severe weather and a more capable flightline to support F-35 Lightning II operations by 2023. Funding will also provide for future weapons platforms in the decades that follow and walkable campus areas providing consolidated one-stop-shop facilities for Airmen and their families.

A third industry day is tentatively scheduled for August which will provide further updates on the innovative ideas submitted and the installation development plan. Although new projects cannot move forward without more funding, the focus of the 325th FW and PMO remains the same: assess facility damage, determine usability and preserve capability.

The industry day presentations and videos will be posted on the website at: www.afimsc.af.mil/tyndallpmo.