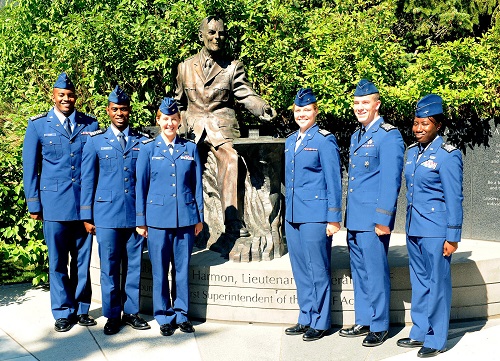 AUGUST 23, 2016, U.S. AIR FORCE ACADEMY, Colo. (AFNS) – A number of Cadet Wing leaders traded in their enlisted careers for cadet life to become Air Force officers, and have used their prior military experience to help them succeed at the U.S. Air Force Academy with the LEAD program.

“My enlisted experience has helped put everything in perspective and context to the active-duty world,” Young said. “I understand how things work at the wing, group and squadron levels, and I can try to mirror that system when applicable in leadership positions.”

Before attending Basic Cadet Training in 2013, both Young and Franklin attended the U.S. Air Force Academy Preparatory School in 2012.

“My prep school experience was very eye opening,” Franklin said. “You go from being in an operational environment to being placed back in to a training environment. You learn to adjust to the ways that the Academy differs from operational units.”

Transitioning from active duty back to a training environment wasn’t the only challenge the Airmen faced.

“The hardest part (of Academy life) for me was learning how to fail and move on,” Young said. “Most of us are used to having the time and resources to complete tasks to the best of our ability and succeed. Sometimes I’ve come short of my goal, and sometimes I’ve missed the mark completely. At first, I got hung up on that and beat myself up for failing. It sounds cliché, but at the end of the day, all you can do is your best. Sometimes you have to accept that you don’t have time to be as successful as you’d like in every aspect of your life.”

Young and Franklin are just two of many enlisted Airmen who have benefited from the LEAD program. The program was initiated in 1995 to provide commanders the opportunity to identify outstanding Airmen, who are qualified to attend the Academy and who exhibit officer potential, for this commissioning program.

“The LEAD program is an on-going effort to give commanders the opportunity to identify and nominate outstanding and deserving (enlisted) Airmen who are qualified and show potential to attend our officer commissioning program,” said Col. Carolyn Benyshek, the Academy admissions director. “They base their recommendations on performance and initiative, which has a direct correlation to success in our program and leads to the potential for an outstanding officer.”

Every year, enlisted Airmen come to the Academy, either through direct appointment or through the Academy prep school.

“On average, 6 percent of the entering class are enlisted Airmen,” Benyshek said. “Fourteen percent of the enlisted applicants end up being cadets, either through the prep school or directly into the Academy. All Airmen have to meet the same entry requirements as all other candidates, the only difference is the nominating source, which for enlisted Airmen are their commanders.”

According to the Academy command chief, Chief Master Sgt. Max Grindstaff, prior-enlisted cadets bring a diverse perspective to the Cadet Wing because they come from different Air Force career fields.

“We typically have just over 300 prior-enlisted cadets, and the value of the combined experiences they bring to USAFA is immeasurable,” Grindstaff said. “They have hands-on experience tackling challenges and succeeding in our Air Force. Many of them have deployed overseas and bring an amazing situational awareness that enhances every interaction they have with non-prior cadets. Some of them have earned Purple Hearts and Bronze Stars, and their stories give a nuanced awareness of what the enlisted force does in our Air Force for those here who’ve not worn the stripes.”

Young offered advice for prior-enlisted Airmen interested in coming to the Academy through the LEAD program stating the experience is not for the faint of heart.

“Know what you’re getting into before you apply,” Young said. “Sometimes priors get here and become a bit cynical because they tune out the lessons they’ve already been taught, like how to make a bed or do a facing movement in basic training. You’re going to be treated just like everyone else, and you can’t let that bother you. It will be frustrating, you will question your decision, and you will get annoyed. But if you focus on the good, and keep your eye on your goal, it will be completely worth it.”

In 10 months, Young and Franklin will be commissioned officers in the Air Force. Young hopes to be a pilot, while Franklin is hoping to be an aircraft maintenance officer. Each of them will lean on their experiences as enlisted Airmen and cadet leaders to help them in their operational career fields.

“I have grown to understand that it is people who make the mission go,” Franklin said. “If you take care of them they will in turn take of you and execute the mission to the best of their ability.”

Prior-enlisted officers bring a different perspective to leading Airmen, because they have firsthand knowledge of what it is like to be an enlisted Airman.

“Having the awareness of the path Airmen take from basic military training to the operational Air Force is going to really enable these future lieutenants to lead more effectively,” Grindstaff said. “There is a ‘street cred’ bump these lieutenants will get when they graduate, being prior enlisted, but more important is that ability to put themselves in one of their Airmen’s shoes that really helps them lead with focus and a well-balanced perspective.”

Grindstaff added that supervisors and commanders play an important role in finding the next generation of Air Force leaders.

“Every supervisor out there should keep an eye out for Airmen who are standing out and displaying leadership qualities,” Grindstaff said. “When you spot him or her, simply have a discussion about whether (the Academy) would be a good fit for them. We need those Airmen here to help lead our Air Force in the decades to come.”

For more information about the LEAD program or the Academy, click here.