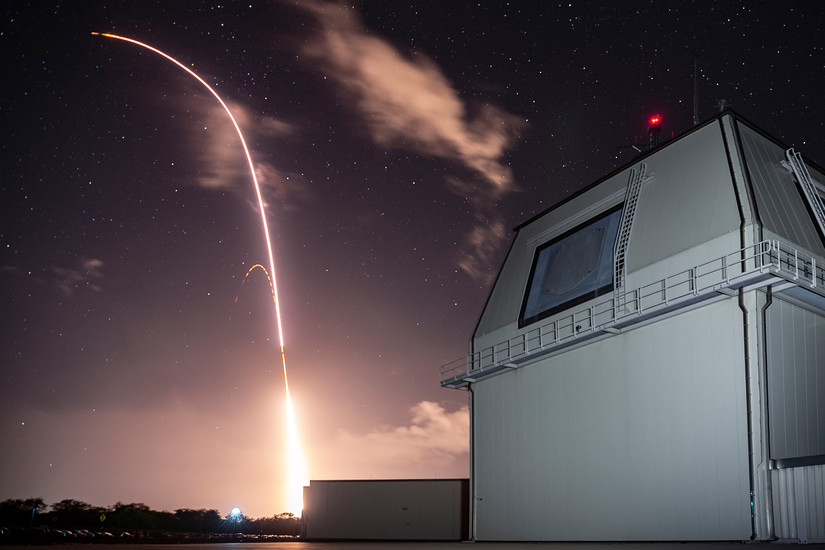 OCTOBER 8, 2019 – The Missile Defense Agency’s mission is to protect the deployed forces, allies and partners from hypersonic and ballistic missile attacks of all ranges through a layered missile defense system, its director said.

Hill illustrated how it works, using an example of a March 25 missile defense test over the Pacific Ocean.

An intercontinental ballistic missile was launched from the Reagan Test Site on Kwajalein Atoll in the Marshall Islands, he said. It cruised into space heading eastward toward the United States.

Meanwhile, more than 4,000 miles away, two ground-based interceptors were launched a minute apart from each other from Vandenberg Air Force Base, California — the first-such test firing more than one GBI, he said.

The first GBI, also known as the kill vehicle, successfully collided with the ICBM target, destroying it, and the second GBI hit a large chunk of that debris, he said.

A lot was happening in the background to make that kill successful, he said.

For instance, two powerful radars were used to track the ICBM, one on Wake Island and one on a floating platform in the Pacific. Satellites fitted with infrared sensors also tracked the target, he said.

Data from the sensors and radars were transmitted to the fire control stations in Colorado Springs, Colorado, and Fort Greely, Alaska, he said.

An X-band radar on a ship in the Pacific picked up the target as it flew through space and collected detailed information to send back to the fire control station, he said. Once the data was received by the warfighters operating the system, they fired the two GBIs, which obliterated the target.

Other types of missiles used in missile defense include the Patriot, the Terminal High Altitude Area Defense and the Standard Missile-3.

Hill then explained the way ahead, noting that great progress has already been made in missile defense since MDA stood up 15 years ago. He also mentioned that there’s still a lot more work to do.

For example, different radars operate at different frequencies. Getting the different systems to communicate with each other is a work in progress, he said.

Also, sharing data and better integrating missile defense with allies and partners is something MDA is doing through exercises and foreign military sales, he said, mentioning the NATO nations, Japan, South Korea, Israel, Saudi Arabia and the United Arab Emirates.

Improving space-based sensors, cyber defenses and installing more GBI is also part of the work the agency is doing, he said.

The agency is also working with the military services on directed energy weapons, such as powerful lasers that can take out missiles, he said.

Hill said that artificial intelligence will become more important over time, with the goal of AI being to more quickly and efficiently inform the warfighter of threats and options so the warfighter can make better decisions.

Lastly, Hill said these improvements are important because near-peer competitors are designing and fielding advanced missiles that are harder to track and take out such as hypersonics and advanced cruise missiles that are very maneuverable.