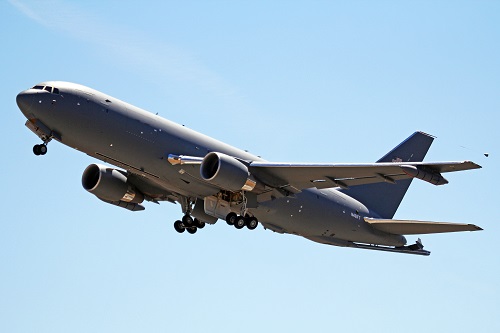 AUGUST 15, 2016, WASHINGTON (AFNS) – The KC-46A Pegasus program received Milestone C approval from Frank Kendall, the under secretary of defense for acquisition, technology and logistics, signaling the aircraft is ready to enter into production.

Work is now underway to award the first two low rate initial production lots within the next 30 days.

“I commend the team for diligently working through some difficult technical challenges,” said Air Force Secretary Deborah Lee James. “The KC-46 program has made significant strides in moving the Air Force toward the modernization needed in our strategic tanker fleet.”

Securing approval to begin low rate initial production required completion of several aerial refueling demonstrations, to include refueling an F-16 Fighting Falcon, C-17 Globemaster III and A-10 Thunderbolt II off the boom, and an AV-8 Harriar II and F/A-18 Hornet off both hose and drogue systems. The KC-46 also proved its receiver capability by taking fuel from a KC-10 Extender.

“The KC-46 is ready to take the next step,” said Air Force Chief of Staff Gen. David L. Goldfein. “Our Air Force and Boeing team stepped up to meet the recent challenges. I’m especially proud of the employees on the floor of the Boeing plant and employees of all our industry partners, who work every day to deliver game-changing capability to the warfighter. My hat’s off to them and our program leads.”

The first aircraft deliveries will be to McConnell Air Force Base, Kansas, and Altus AFB, Oklahoma. A total of 18 tankers are scheduled to be delivered by early 2018.

“I am exceedingly proud of the KC-46 program office for clearing the production hurdle,” said Darlene Costello, an Air Force Service Acquisition executive. “We have crossed an important milestone, and I appreciate Boeing’s continued focus as they work to finish development prior to first aircraft delivery.”

Going forward in the test program, the KC-46 will complete a robust schedule of Federal Aviation Administration and military certification flight testing, including refueling test flights, in order to achieve certification for aircraft in the Air Force and Department of Defense inventory.