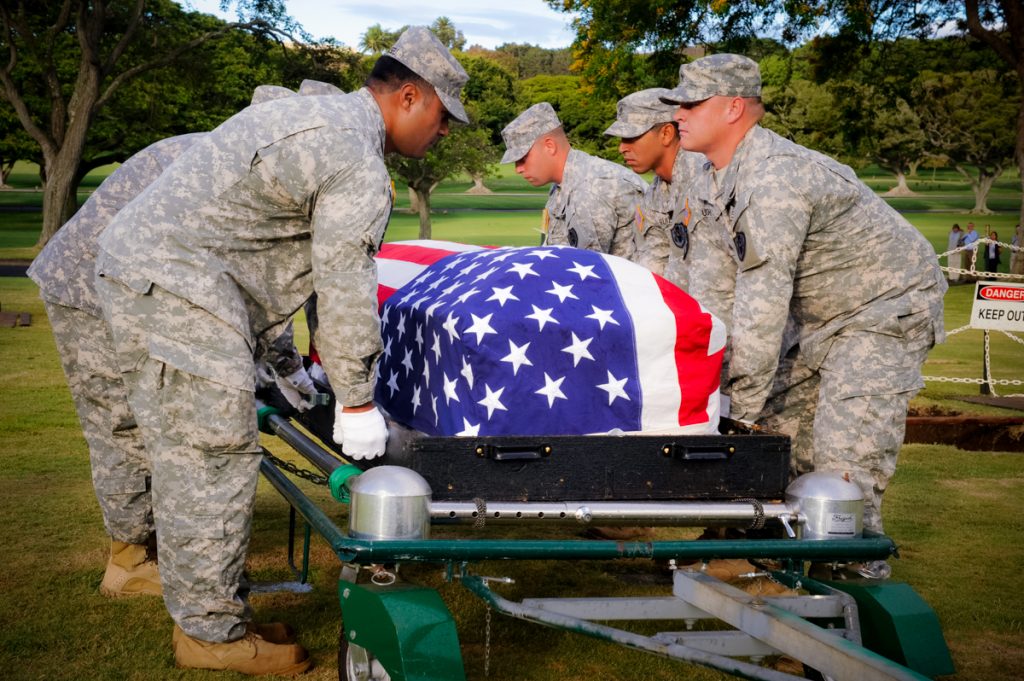 JULY 17, 2019 – The Defense POW/MIA Accounting Agency (DPAA) announced today the remains of at least 22 servicemen, killed during the battle of Tarawa in World War II, are being returned to the United States in an Honorable Carry Ceremony at Joint Base Pearl Harbor-Hickam, Hawaii, July 17, 2019.

The Battle for Tarawa was part of a larger U.S. invasion (Operation GALVANIC) to capture Japanese-held territory within the Gilbert Islands. The operation commenced on November 20, 1943, with simultaneous attacks at Betio Island (within the Tarawa Atoll) and Makin Island (more than 100 miles north of Tarawa Atoll). While lighter Japanese defenses at Makin Island meant fewer losses for U.S. forces, firmly entrenched Japanese defenders on Betio Island turned the fight for Tarawa Atoll into a costly 76-hour battle.

Over several days of intense fighting at Tarawa, approximately 1,000 Marines and Sailors were killed and more than 2,000 were wounded, while the Japanese were virtually annihilated. Servicemen killed in action were buried where they fell, or placed in large trench burials constructed during and after the battle. These graves were typically marked with improvised markers, such as crosses made from sticks, or an up-turned rifle. Grave sites ranged in size from single isolated burials to large trench burials of more than 100 individuals.

Postwar Graves Registration recovery efforts were complicated by incomplete record keeping and by the alterations to the cemeteries shortly after the battle. The locations of multiple cemeteries were lost. The alternations to other cemeteries resulted in the relocation of grave markers without relocating the remains beneath. These sites became known as memorial graves. As a result, many of the Tarawa dead were not recovered.

“Today we welcome home more than 20 American servicemen still unaccounted for from the battle of Tarawa during World War II,” said Acting Secretary of Defense Richard V. Spencer. “We do not forget those who gave the ultimate sacrifice, and it is our duty and obligation to return our missing home to their families and the nation. Thank you to everyone who took part in this repatriation.”

DPAA is grateful to History Flight, Inc. for their continued partnership and dedicated support.

Of the 16 million Americans who served in World War II, more than 400,000 died during the war. Currently there are 72,692 service members still unaccounted for from World War II, of which approximately 30,000 are assessed as possibly-recoverable.

For a live stream of today’s Honorable Carry visit: https://www.dvidshub.net/webcast/20886

For more information on the battle of Tarawa, casualties and recovery efforts, visit https://www.dpaa.mil/Resources/Fact-Sheets/Article-View/Article/569615/tarawa/.

For additional information on the Defense Department’s mission to account for Americans who went missing while serving our country, visit the DPAA website at www.dpaa.mil, find us on social media at www.facebook.com/dodpaa or call (703) 699-1420/1169.