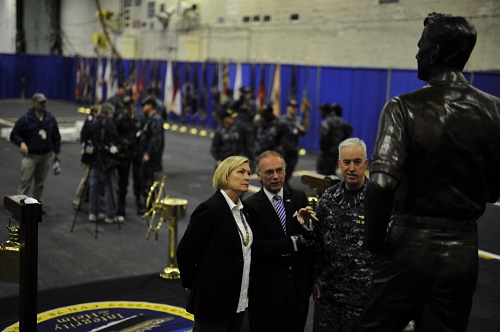 “He was a servant leader long before that became a term, and it is my fervent hope that his character and integrity reflect onto the crew of this ship,” said Capt. John F. Meier, Ford’s commanding officer. “How fortunate we are to be part of a ship that bears Gerald R. Ford’s name.”

The statue depicts Ford holding a sextant and looking out over the water.

Ford began his U.S. Navy service as an ensign in April 1942. He served aboard the light aircraft carrier USS Monterey from May 1943 to December 1944, excelling as the ship’s director of physical training, gunnery officer and assistant navigator. He was honorably discharged in January 1946 at the grade of lieutenant commander.

“Being the namesake of an aircraft carrier is the tribute about which my father was grateful beyond words,” said Susan Ford Bales, ship’s sponsor. “What a wonderful day in the legacy of the man I am so proud to call Dad.”

Sculptor, J. Brett Grill, a native of Rockford, Michigan, has sculpted many other statues of the 38th president, including the statue of President Ford in the United States Capitol building, and a one-third replica at City Center in East Grand Rapids, Michigan.

This statue is unique in that it is centered on Ford’s life as a Sailor, not as a politician.

“It is incredibly humbling to be part of a project like this and seeing the life and adventure that one of my statues is going to have,” said Grill.

The Ford statue will become a permanent part of the ceremonial quarterdeck aboard CVN 78.

“Today, and every tomorrow, may this statue and the words on its base be living reminders of the extraordinary life and legacy of your ship’s namesake,” said Greg Willard, corporate secretary and trustee of the Gerald R. Ford Presidential Foundation and close friend to the Ford family.

Willard closed his speech by emphasizing one of the quotes at the base of the statue spoken by Ford upon becoming commander in chief, which directly ties into the mission of the ship and its crew.

“I solemnly reaffirm to uphold the Constitution, to do what is right as God gives me to see the right and to do the very best I can for America,” recited Willard. “God helping me, I will not let you down.”