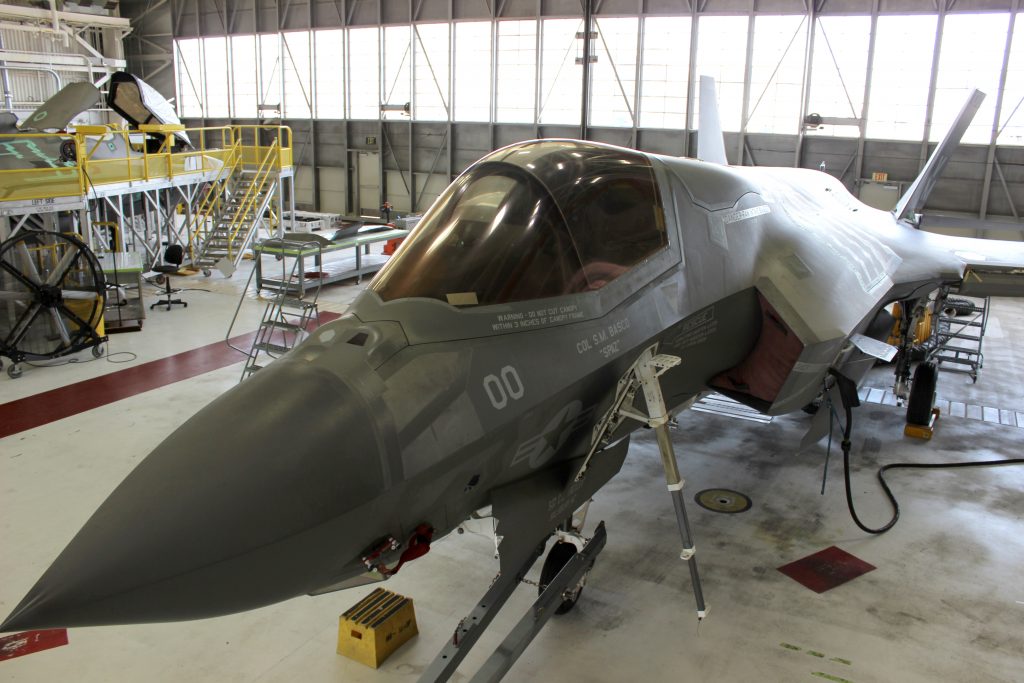 JULY 20, 2021 – Fleet Readiness Center East (FRCE) marked a milestone in its support of the F-35 Lightning II program when the depot inducted its 100th F-35 for modifications June 11.

The induction signifies more than just a number – it represents eight years of efforts to stand up and grow the F-35 modification line at the depot, said FRCE Commanding Officer Col. Thomas A. Atkinson.

“We are very proud to support the F-35 platform and achieve this important milestone,” Atkinson said. “The F-35 maintenance concept is different than what we see on other platforms. Our experience on these 100 jets has made us stronger as a command and we look forward to continuing our contribution as more F-35s are fielded.”

The depot has been able to meet this milestone only through the diligence and commitment of the team servicing the aircraft, said FRCE F-35 Branch Head Ike Rettenmair.

“The team has come a long way since the first induction, and is one of the most dedicated teams I have been a part of,” Rettenmair said. “This platform has challenges that are unlike most others, and the team takes them head on. FRCE is 100 percent behind the partnered effort to make the F-35 program successful and, although we are only one piece of the pie in the enterprise, we take pride in supplying the warfighter with a capable and quality aircraft.”

In addition to marking a milestone, the 100th F-35 induction also serves as a stepping stone to the future of the program at the depot, said Matt Crisp, FRCE site lead for the F-35 Joint Program Office. An additional workload of F-35 components, a new lift fan facility and expansion of the F-35 aircraft line’s capacity are all coming into view on the horizon.

“This is not the finish line,” Crisp said. “We’re just getting up to speed at this point. We’ve come a long way, and things are looking good going forward for FRC East and the people who work here, who live here, and rely on this program as how they support their families. There are a lot of really good things coming to our area.”

Rettenmair said he also looks forward to watching the program continue to grow.

“Although 100 is a great milestone, there are still may more years to go in support of the F-35,” he said. “I have only been on the F-35 program for a short stint and I’m still getting my feet wet; however, it didn’t take me long to realize this is a special team and I’m glad to help lead the way into the future. I hope I’m still here to see our 200th aircraft induction and beyond, as FRCE continues to meet the mission with pride, teamwork and – at times – frustration, and always safely and with quality.”

FRCE inducted its first F-35 aircraft for modification in July 2013 after having just eight months to prepare for the workload, said Jeanie Holder, the F-35 Joint Program Office induction manager at FRCE. Despite the compressed timeline, the facility was able to induct its first F-35B short takeoff-vertical landing variant on schedule, and has since proven capabilities on the remaining two aircraft variants: the F-35C carrier variant, and the F-35A conventional takeoff and landing variant.

“There have been a lot of hands-on work and tireless hours executed to make this depot sufficient to support a fifth-generation jet that, at the time, we weren’t used to doing here,” Holder said. “For us to hit 100 aircraft is a huge accomplishment that shows just how hard we’ve collectively worked. It’s not just FRC East or the F-35 Joint Program Office or Lockheed Martin – it’s been a real team effort.”

That team effort has made the program more efficient as relationships between key stakeholders have developed and strengthened, noted Allen Williamson, an overhaul and repair supervisor on the F-35 line.

“A lot of our government and industry partnerships have grown, and we’re getting buy-in from the partners to be able to turn these jets around as quickly as possible,” Williamson noted. “We’ve opened up and taken advice from Lockheed Martin and the Joint Program Office, and when we run into an issue we now have a consolidated team coming together to address it and figure out a way forward that works for all of us. I think we’ve been really successful at that.”

Joseph Simonds, an F-35 airframes work leader who has been with the program since the very first induction eight years ago, said this teamwork has helped the program make great strides in efficiency.

“We’ve gotten better, we’ve gotten quicker,” Simonds said. “A lot of the processes have gotten smoother because, just like any other program, when we first started there were a lot of unknowns. Over the years, everything has slowly fallen into line and the program gets better with that. Now it’s like, Here’s everything you need to do your job, so have at it.”

While the program has been improving efficiency and strengthening partnerships, the workforce modifying the aircraft has made gains in knowledge, Williamson added, which helps them quickly and competently address any new aircraft issues that might arise.

“We still run into new hurdles all the time, but teamwork has gotten us to the 100th induction and will take us well beyond,” he said. “We know where to go when we need help, and who can help us, and we don’t delay in going there.

“The knowledge our mechanics have accumulated in just 100 jets, it’s great,” Williamson continued. “It’s amazing that they can troubleshoot these jets with the knowledge they’ve developed through working on these aircraft, taking things apart and putting them back together, and they can go in and pinpoint problems in a timely manner.”

The facilities, skills and knowledge of the artisans and strong partnerships that have facilitated the growth of the F-35 program at FRCE since its first induction have laid the groundwork for future success, Crisp said.

“It is pretty remarkable when you think about where we’ve come from eight years ago, strike a baseline here and then look forward at what’s coming this way,” he said. “Over these eight years, we haven’t just added dock space and added people; we’ve developed every one of the supporting logistical elements that put the tools in place so the production floor can go and execute, and gotten better, faster and stronger at what we’re doing.

“We’re talking 100 airplanes – that’s hundreds of thousands of hours of touch labor, and engineering and logistics support, just on the aircraft that have come through FRC East, not to mention the Rapid Response Team, depot field teams, and weight and balance teams going out to the fleet to assist. We’re talking parts manufacturing, the facilities and infrastructure we have improved, building those relationships; these have all been absolutely critical for us to have gotten to where we are, and to get us to where we need to go in the future.”

As the F-35 program continues to grow at the depot, Crisp said he anticipates even further development of the key support elements. For example, FRCE declared capabilities on several F-35 components in 2020 – meaning FRCE is now a verified source of repair and testing for these items – and is on track to declare for additional components this year and in the future. A lift fan facility scheduled for groundbreaking this year will provide FRCE with one of only two sites in the world that can service that system, and the F-35 program has plans for expanding the amount of aircraft FRCE can accommodate at once.

“FRC East is absolutely critical not only to the United States Marine Corps, but to all of our international partners who are procuring F-35B aircraft, of which there are multiple,” Crisp said. “There’s a lot of work, a lot of jobs and a lot of touch labor that we’re going to need in the future, so that’s very exciting. And then when you look three to five years out, we’re going to start having active F-35 squadrons that are arriving here at Cherry Point – we’ll be able to walk down the street to a whole flight line of deployable F-35s and share knowledge and expertise with the squadrons. We’ll continue to build relationships that will benefit both the squadrons and the depot.”

The success of the F-35 program at FRCE, lies with the depot’s people, Holder said, and those people will continue to push for excellence as the program grows into the future.

“From the floor up to our leadership here, you’ve got an A-team and that’s the only reason we’ve been as successful as we have,” Holder noted. “We all take our jobs very seriously, we own them, and we do what we have to do to make sure we are successful in getting these jets back to the fleet on time.”