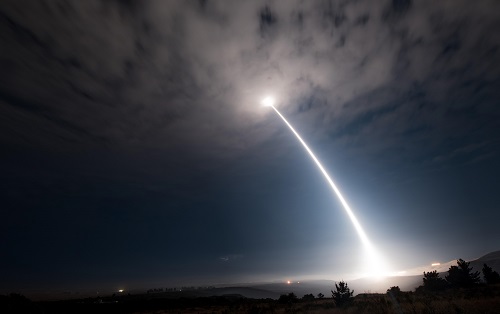 While not a response to recent North Korean actions, the test demonstrated the U.S.’ nuclear enterprise is safe, secure, effective and ready to deter, detect and defend against attacks on the U.S. and its allies.

The ICBM’s reentry vehicle, which contained a telemetry package used for operational testing, traveled approximately 4,200 miles to the Kwajalein Atoll in the Marshall Islands. These test launches verify the accuracy and reliability of the ICBM weapon system, providing valuable data to ensure a continued safe, secure and effective nuclear deterrent.

“This operational test launch highlights the commitment and outstanding professionalism of the 90th Missile Wing, the 576th Flight Test Squadron and our mission partners in the 30th Space Wing,” said Col. Dave Kelley, the 576th FLTS commander. “These test launches require the highest-degree of technical competence and commitment at every level and provide critical data necessary to validate the reliability, accuracy and performance of the ICBM force.”

“I am extremely proud of the operators and maintainers from the 90th Missile Wing. This task force worked flawlessly alongside the absolute professionals from the 576 FLTS to make this mission a success,” said Lt. Col. Troy Stauter, the Glory Trip 223 Task Force commander. “Promoting the deterrence, assurance and strike capability of the Minuteman III could not be done without the dedication, professionalism and teamwork of the men and women of Air Force Global Strike Command.”

The ICBM community, including the Department of Defense, Department of Energy and U.S. Strategic Command, uses data collected from test launches for continuing force development evaluation. The ICBM test launch program demonstrates the operational capability of the Minuteman III and ensures the U.S.’ ability to maintain a strong, credible nuclear deterrent as a key element of U.S. national security and the security of U.S. allies and partners.