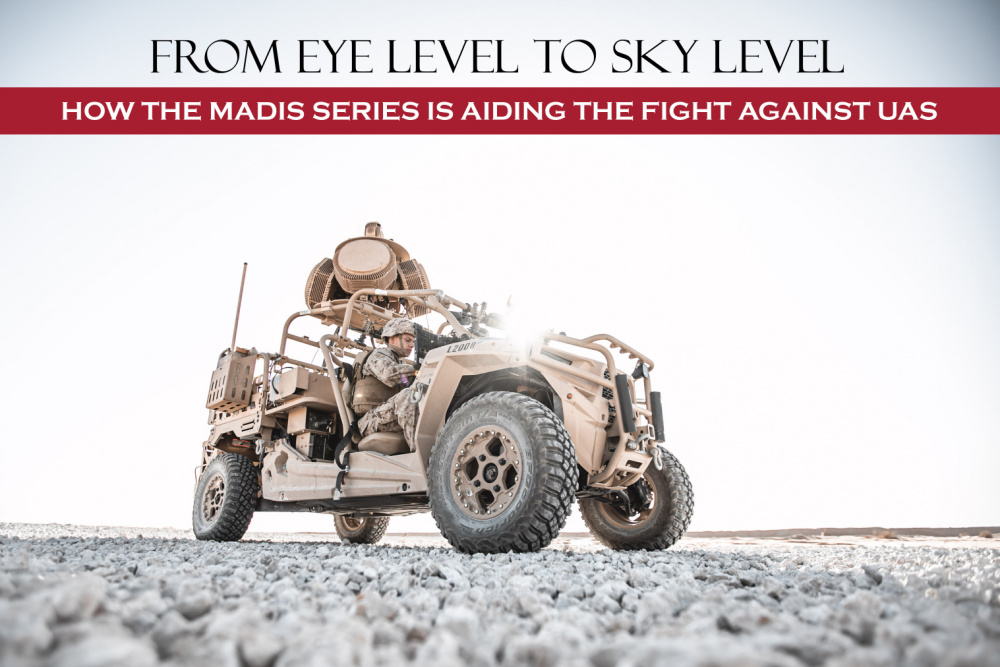 JUNE 14, 2021 – “Swift, Silent, Deadly”. While the mantra is typically used to describe a Reconnaissance Marine, the idea behind it is one that should be studied and emulated by all Marines. The idea that one should be in and out and undetected, all while maintaining lethality is a perfect description of an Operational Marine operating within the battlespace. In order to achieve this, however, Marines must need to be prepared to maneuver at a moment’s notice.

Low Altitude Air Defense Marines have been given assets which allow them to accomplish this mission. The Marine Air Defense Integrated System, or the MADIS, allows LAAD Marines to ground-air defense protecting against low flying enemy aircraft- all while staying light and expeditious. These systems, which are outfitted with radar and electronic warfare capabilities, come mounted on a Joint Light Tactical Vehicle (JLTV). The purpose of the MADIS is to conduct short range ground-to-air targeting while on the move. The Light MADIS, or LMADIS, comes even more compact – mounted on an All-Terrain Vehicle called the Polaris MRZR.

The MADIS allows the Marine Corps to remain competitive with near-peer adversaries. In the United States Central Command area of operations the systems have been employed to protect US and allied forces against enemy unmanned aircraft systems, specifically drones. Terrorist organizations are using commercial drones to carry out remote acts of terrorism. This method is cheap, easy to access, and allows for deniability as well. Along with conducting surveillance on allied positions, these drones can easily be armed with explosives and operated remotely with no risk to the operator.

“In recent years, terrorist cells such as Al-Qaeda and Isis have been using UAS for reconnaissance. They’ve also been attaching grenades, mortars, even acid to (the drones),” he continued,

“This is a very ‘my generation’ thing. They are easy to use. Most of the time, the pilots can pretend it’s a video game”

This ease of access, unfortunately, allows for risk-free remote warfare. In Drone Warfare: Killing by Remote, author Medea Benjamin makes the statement that “The biggest ethical problem with drones is that it makes killing too easy”. The United States and her partnered nations are facing an enemy that does not follow a similar code of morals or ethics. To drone operators, civilians are transformed to tiny specs on a screen. At times, and especially with a cheaper drone, it can be hard to determine the difference between combatants and noncombatants – placing a greater risk to the civilian population. Unlike traditional kinetic fires, these non-autonomous systems are controlled at a distance by humans who specifically selecting their targets with great precision.

Countries such as Syria, Saudi Arabia, Iraq, Yemen, and Afghanistan have seen an increase in attacks which have been conducted by commercial drones. These attacks have been carried out on civilian populations as well as local infrastructure. As the technology becomes cheaper, it will additionally become easier to obtain. Essentially, these easy-to-use drones can be placed in the hands of anyone.

Recent technology has even introduced the idea of a ‘kamikaze drone’ which has the sole purpose of making a one way flight to deliver its explosive laden payload.

Thankfully, the Marine Corps has fielded the MADIS series to forward deployed units. One of the challenging aspects for the Marine on post is being able to spot a drone flying several hundred feet above head at a large distance. Once identified by radar, the operator can lock on to the flight plan. The system then uses radio frequency to signal blast the communications of the drone. This will either send it back to its original launch point, or force it to hover until the battery dies.

Lance Corporal McMann went on to say, “[The drones] can be really hard to spot with your eyes, but now we have the MADIS. It has three components. It can detect it, identify it, and defeat it”