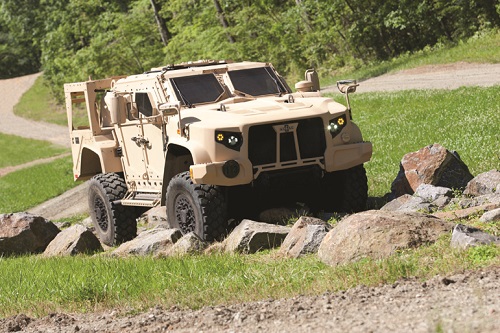 The 2016 David Packard Excellence in Acquisition and the Should Cost and Innovation Awards recognize extraordinary achievements that represent the “best and brightest of acquisition” and of the Defense Department, Work told attendees of the Pentagon ceremony.

Among the recipients of the 2016 David Packard Excellence in Acquisition awards — the Defense Department’s highest acquisition team honor — was the Army’s Project Manager Maneuver Ammunition Systems.

Other recipients of the Packard Award were the Next Generation Jammer Increment 1 team and the Special Operations Command’s Acquisition Rapid Response Light Tactical Vehicle team.

The Should Cost and Innovation Award went to the Joint Program Office, Joint Light Tactical Vehicles, or JLTV team, for the Army and Marine Corps.

The winners demonstrated superior program management and accomplishment in the successful execution of one or more of the “Better Buying Power” efficiencies and associated initiatives, Work said.

The Project Manager Maneuver Ammunition Systems was presented with the Packard award for its innovative acquisition strategy and rapid delivery of non-DOD standard ammunitions to Iraq, Afghanistan, and domestic and other allied partners engaged in counterterrorism.

Realizing the need to shorten delivery times of ammunition in the fight against ISIL and the ongoing conflicts throughout U.S. Central Command’s area of responsibility, the team achieved greater agility and reduced deliveries to a fraction of the time.

The swelling demands on a limited supplier base had slowed delivery times, so Project Manager Maneuver Ammunition Systems relied on an innovative systems contracts approach, coupled with the establishment of a global urgent supply.

Requirements with delivery times of 12 to 24 months were reduced to 6 months, and in some cases, when partnering with other government agencies, less than three months.

The Joint Program Office, Joint Light Tactical Vehicles was awarded the Should Cost and Innovation Award for implementing “should cost” initiatives that resulted in significant cost savings.

The first JLTVs were turned over to the Army and Marine Corps in September for reliability and mobility testing, and officials said the program is on schedule. The contract is anticipated to save $2.2 billion in life-cycle sustainment costs for vehicles.

In total, the competitive strategy and vehicle design are estimated to save $7.9 billion across the final JLTV fleet.