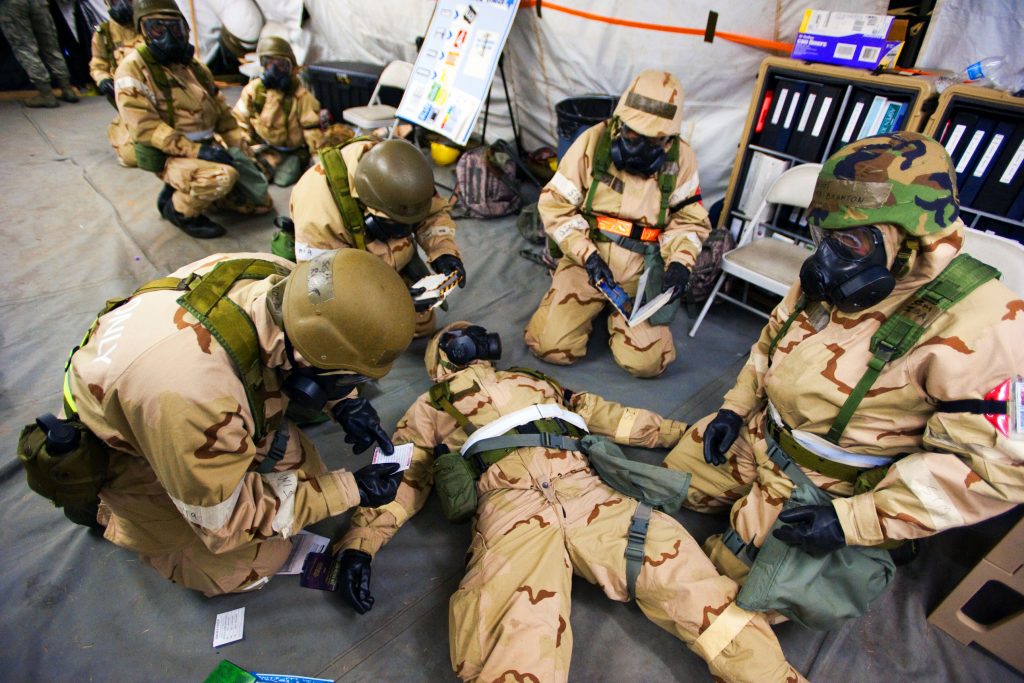 JULY 22, 2021 – Researchers led by Dr. Maria F. Braga, a professor in the School of Medicine at the Uniformed Services University of the Health Sciences (USU), have identified a neuroprotective combination therapy that is effective against organophosphate (OP) nerve agent exposure.

Nerve agents are deadly chemical weapons that present a serious and growing threat to military and civilian populations. Nerve agents were used in the Iraq-Iran war, against Kurdish civilians, in terrorist attacks in Japan, and most recently, against civilians in Syria and England. Without intervention, OP nerve agents can cause seizures, which can have serious effects such as brain damage, coma, and even death.

“Current Food and Drug Administration (FDA)-approved medical countermeasures, benzodiazepines, are inadequate in preventing brain damage or counteracting many of the acute intoxication symptoms of nerve agents, such as arresting seizures,” said Braga. “Brain damage as a result of exposure can lead to long-term neurological and neuropsychiatric disorders.”

Braga first investigated LY293558, or Tezampanel, as a stand-alone treatment for nerve agent exposure with support from the National Institute of Neurological Disorders and Stroke. After promising preclinical results, the Biomedical Advanced Research and Development Authority awarded an $89.5 million contract for the advanced research development of Tezampanel.

During their advanced development research, Braga’s team found Tezampanel did not prevent brain damage six months after exposure. Therefore, to enhance neuroprotective efficacy, a Tezampanel and Caramiphen combination treatment was created by Braga and her research team. Caramiphen is a drug used to treat Parkinson’s disease and has anticonvulsant and neuroprotective properties.

“We discovered that this combination therapy is highly effective and induced complete protection against brain damage up to six months after exposure,” said Braga. “This therapy also allows the doses of LY293558 and Caramiphen to be reduced considerably, thus decreasing the incidence of side effects and increasing the tolerability of the proposed treatment in humans.”

Another important aspect of this neuroprotective combination is that it extends the therapeutic window in a mass casualty scenario, with efficacy even when administered hours after exposure. In circumstances when it may take significant time to access and treat those affected, this capability may save lives.

Braga worked with the USU-Henry M. Jackson Foundation for the Advancement of Military Medicine (HJF) Joint Office of Technology Transfer to secure a patent for the discovery. HJF recently received notice of allowance for a patent from the United States Patent Office for this medical countermeasure to OP nerve agent exposure. Obtaining the patent is an important step in creating this combination therapy, however, Braga’s team still has work to do in developing a product that’s ready for use in the field.

“Our current goal is to acquire the remaining pre-clinical data necessary to pursue the advanced development of this very promising therapy,” said Braga. “Since our treatment relies upon drugs that have not been individually approved previously for this use, further development will be pursued in accordance with FDA guidelines. We intend to engage regulatory experts and to work with the FDA from an early stage.”

Acquiring these data and advancing this combination therapy into a field-ready product could be a tremendous step forward in protecting warfighters and civilians alike from the deadly chemical weapons that are OP nerve agents.