ABOARD A U.S. MILITARY AIRCRAFT, May 15, 2013 – Sexual assault in the force constitutes a crisis in the military, the chairman of the Joint Chiefs of Staff said today.

“We’re losing the confidence of the women who serve that we can solve this problem,” Army Gen. Martin E. Dempsey told reporters as he returned from NATO meetings in Brussels. “That’s a crisis.”

Dempsey has actively been researching this issue since he became the Army’s Training and Doctrine Command chief in 2008. He continued the research as Army chief of staff, and now as chairman.

“I tasked those around me to help me understand what a decade-plus of conflict may have done to the force,” he said. “Instinctively, I knew it had to have some effect.”

The chairman still cannot articulate what 10 years of war has done to the force, but he does think the increase in sexual assaults, the rise in suicides, and the increase in instances of misconduct and indiscipline are in some way related.

All of the Joint Chiefs share his concern, Dempsey said, which was why the chiefs issued direction to the Joint Force on Sexual Assault Prevention and Response in May 2012.

“That’s why we are very open to some of these legislative recommendations on changing the [Uniform Code of Military Justice],” he said. “I just want to make sure I understand the second- and third-order of effects of them.”

Dempsey said the Joint Chiefs of Staff will work with all parties to find solutions to this crisis.

Meanwhile, the service branches are studying the effects of multiple and prolonged deployments on their military members.

“I would like each service to look at this and then bring back to the Joint Chiefs to see what we can learn among us all,” he said.

Dempsey has a letter from the chairman and minority leader of the Senate Armed Service Committee to assess the various legislative proposals geared to prevent sexual assault in the military.

“There are a lot of good ideas out there. There are some I don’t think are good ideas, and there are some I really don’t understand,” he said. “I’m hoping to provide my best advice back to those making the proposals. But I assure you that we are open-minded to see if there are opportunities to do better out there.” 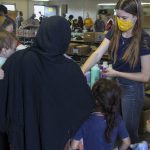 SEPTEMBER 23, 2021 — To help with the refuge efforts for Afghan families, the Army plans to hire additional civilians within and outside the force to process evacuees at different locations. Following the departure of the U.S. military from Afghanistan after two decades, the Defense Department pledged to welcome all Afghan families who left to […]