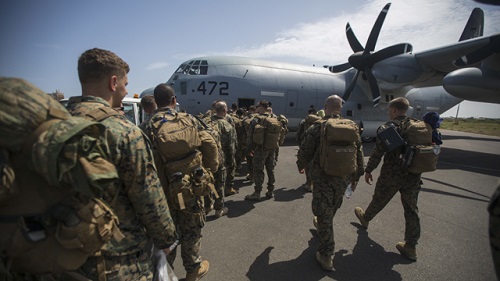 APRIL 18, 2016, CANARY ISLANDS, Spain – U.S. Marine Corps KC-130J Hercules with Special Purpose Marine Air-Ground Task Force-Crisis Response- Africa flew straight and level as the F/A-18 approached from behind to receive fuel. This F/A-18 however belonged to the Spanish Air Force, conducting an air-to-air refueling mission from a U.S. Marine KC-130J for the first time during a training exercise in Gran Canaria, Spain, Mar. 29, 2016.

“The purpose of the trip was to do bilateral training with the Spanish 462 Squadron,” said Capt. Kyle Bookhout, a pilot with Marine Aerial Refueler Transport Squadron 252. “We provided them with aerial refueling and played along in some of their training scenarios so that they can keep improving their qualifications and maintain their readiness.”

During the training scenario, the C-130 acted as the “slow mover” among the group of fighter jets. The Marines simulated dropping paratroopers at a designated landing zone while the Spanish F-18s provided security above the route. Following the scenario, the Marines refueled the jets to give the Spanish pilots additional training in aerial refueling.

“I think it’s a great opportunity anytime that you can get two nations together and do this type of bilateral training,” said Bookhout. “They have limited assets for air refueling so we help them out and keep their qualifications current. Just seeing how other people operate and getting past the communication barriers and seeing that we’re all pretty similar… It’s just a great experience and I think everyone receives a lot of training value out of it.”

While this was the first time U.S. Marine aircraft had refueled the 462nd, the C-130 crews make an effort to do refueling missions with the Spanish at least twice a month to remain proficient in their assigned mission essential tasks throughout the deployment. Bilateral exercises such as this one help reinforce the strong relationships between the U.S., Spanish and other NATO allies.

“Just working with the Spanish or other foreign militaries helps in case we do, in a real-world mission, have to deal with other nations,” said Bookhout. “We’re already familiar with how they operate and they’re familiar with how we operate.”