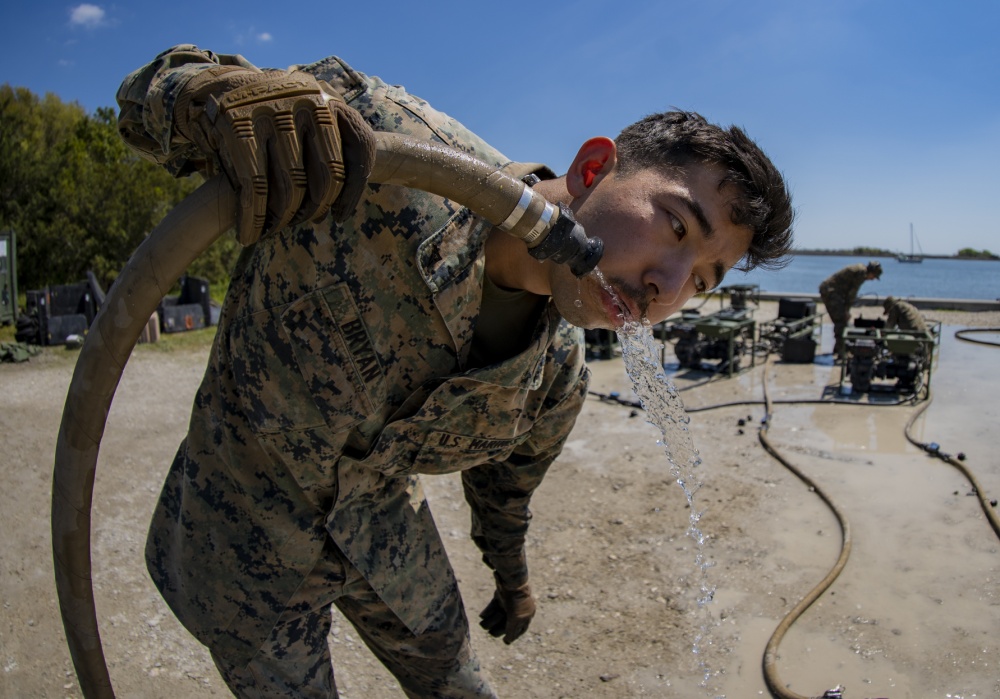 MAY 5, 2021 – Marine Corps Systems Command is developing and fielding new, cutting-edge power and water capabilities to modernize the service and align with the commandant’s vision of the future force.

“Your forward contact forces that are deterring every day are your fighting forces,” Berger said during an Amphibious Warship Industrial Base Coalition event in February 2020. “They’ll be asked to operate in small, distributed groups, capable of taking a location, using it to refuel and rearm planes, strike a target or move supplies, and then pack up and move to a new location within 48 to 72 hours.”

“We have several new systems currently fielded or under development designed to meet this vision,” said Hoy.

GREENS, which MCSC fully fielded to Marines in 2018, collects solar energy and converts it to usable power. The system uses solar panels and rechargeable batteries to provide an average continuous output to sustain equipment and fills capability gaps left by large power generators and batteries.

“The GREENS can also be hybridized with generators and vehicle power to provide an intelligent small scale energy management system,” said Hoy.

The Large Energy Storage Unit, another power system under development, will serve as a larger version of ULEPS, providing backup power source to electronic capabilities in the event a generator malfunctions.

If a generator shuts off, energy is transferred to the Energy Storage Unit until the generator returns online. These storage systems also allow Marines to turn off one or two generators that would normally be required, which saves the Marine Corps in fuel and maintenance parts, said Hoy.

“In the past, if a generator spikes, it shuts off,” said Hoy. “With the energy storage unit, Marines won’t have to worry about that because they’ll always have extra power.”

MCSC is also developing the Mobile Electric Hybrid Power System, a trailer-mountable capability that integrates and automatically controls hybrid power systems, generators, batteries and solar panels. The system will conserve fuel by increasing the efficiency of generators through the use of solar panels.

When battery energy is depleted, the MEHPS automatically turns on the generator and runs at its optimum efficiency, or full-rated power. Any excess power not going to equipment is used to recharge the batteries.

MEHPS is scheduled to field in FY24. Hoy said MEHPS and the Energy Storage Units in development will give Marines uninterrupted power to efficiently and effectively complete missions.

Reducing carbon emissions
The development of MEHPS exemplifies the Power Team’s efforts to not only increase battlefield efficiency, but also to reduce the Marine Corps’ carbon footprint.

The Department of Defense has placed an emphasis on decreasing the emission of greenhouse gases. In memorandum released March, Secretary of Defense Lloyd Austin said the U.S. military will act immediately to include the security implications of climate change in the United States’ risk analyses, strategy development and planning.

“The changing climate is altering the global security and operating environments, impacting our missions, plans and installations,” said Lloyd.

MEHPS regulates power from renewable energy, battery arrays and auxiliary sources while managing the power available from each source to minimize fuel consumption. Decreasing fuel consumption leads to the environmental benefit of a reduced carbon footprint.

Hoy said the Power Team is also researching wind energy, newer battery chemistries, turbine generators, hydroelectric generators and other fuel-efficient sources to meet the warfighter’s needs on the battlefield in the future.

“The [DOD] views climate change as a threat to national security,” said Hoy. “We are always looking at ways to reduce our carbon footprint.”

For example, the Platoon Water Purification System is a vehicle-transported capability able to produce up to 15 gallons of water per hour at the unit level, allowing Marines to rely less on logistical resupply missions to provide a water capability. The system is scheduled to field later this year.

“PWPS produces drinking water from fresh, brackish and salt water sources to support a group of personnel for up to 30 days,” said Foust.

The Lightweight Water Purification System is a smaller, man-portable capability that provides a multipurpose system for the production of drinkable water for Marines. LWPS enables Marines to purify water from any source, including water contaminated by chemical, biological, radiological and nuclear agents.

“This system is essential to providing potable water in a modular format that can support sizes from an infantry company up to an infantry battalion,” said Foust.

LWPS fielded in 2011 and underwent upgrades in 2017. MCSC is in the early stages of developing the Lightweight Water Purification System 3.0, which provides the increased capability for water purification above the platoon level.

LWPS 3.0’s unique scalability enables Marines to configure the system based on field water requirements, reducing excess weight and logistics footprint for the warfighter. The FEWS team plans to begin verification testing of LWPS 3.0 this summer.

“These water systems will allow Marines to become more self-sufficient, agile and responsive while forward deployed,” said Foust. “That, in turn, helps them focus on their job and achieve mission success in any clime or place.”