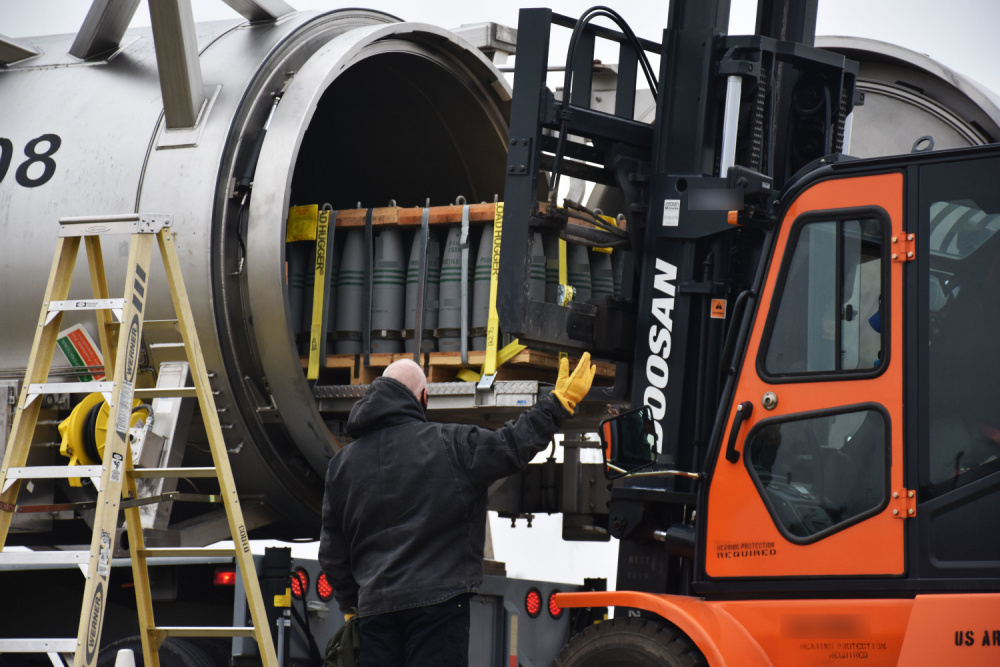 “Our crews have been training and preparing for this day for quite a while,” said Lt. Col. Edward E. Williams, BGCA commander. “Their diligence in following safety protocols and established processes ensured a safe transfer of the first load of VX projectiles to the demilitarization plant.”

The Blue Grass Army Depot, formerly known as the Lexington-Blue Grass Depot Activity, received the first five rail cars of VX projectiles from the Newport Army Ammunition Plant in Newport, Indiana, on October 28, 1966. Over a half century later, these weapons are being transported for destruction.

VX, the most toxic and persistent of all known nerve agents, was originally developed by chemists at a British government facility in the early 1950s. It was then produced in large quantities by the U.S. and Soviet Union during the Cold War.

Disturbed by the past use and effects of chemical weapons in war, world leaders created the Chemical Weapons Convention (CWC) in an effort to achieve a world free of chemical weapons and the threat of their use. The U.S., one of 193 member states that signed the CWC, is now in the final stages of destroying its chemical weapons stockpile.

“We successfully supported the GB projectile destruction campaign, which was completed in 2020,” said David Velazquez, director of chemical operations. “Now, we are loading VX projectiles for transport to the main plant while continuing to transfer mustard projectiles for demilitarization in the static detonation chamber.”

The BGCA team is very familiar with the challenges of supporting two campaigns at once, and engages in comprehensive advanced planning and coordination with mission partners to ensure successful operations. The team prepares a munitions movement plan that outlines the details and participants of the upcoming munitions transport. Personnel conduct inspections and pre-operational checks on equipment and vehicles slated for use. Prior to the start of the day’s operations, a final meeting is conducted to ensure all required personnel and equipment are available and in-place for safe operations and that all team members understand their roles.

Workers routinely analyze procedures and implement improvements based on lessons learned from previous operations. While training for VX projectile movement, the team noticed a safety issue with the location of munitions transport vehicle, called an enhanced on-site container (EONC).

The EONC trailer must be on level ground to ensure the safety of the work crew and munitions. However, the incline of the ground outside the munitions storage igloo made it difficult to open the EONC door to load the munitions. After attempting a variety of techniques that had worked in the past, the team realized the safest course of action was to relocate the EONC a few feet forward to more level ground. This solution ensured compliance with standard operating procedures and regulations while reducing the risk associated with loading munitions on an incline.

“I commend the team’s ability to adapt to ensure the safety of our people and the chemical weapons,” Williams said. “I am proud of our workforce, not only for their continued perseverance in conducting our mission, but also for their dedication to doing it safely.”