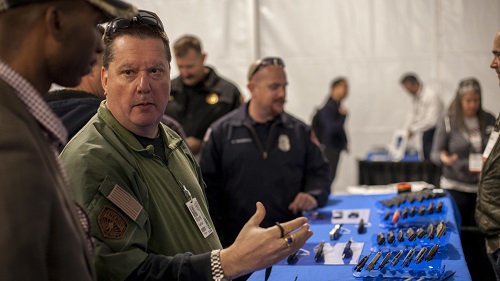 The exposition is an event showcasing new gear, gadgets and equipment to Marines from hundreds of vendors from around the world. The event, now in its 25th year, also gives Marines a chance to provide feedback to members of the defense company in order to meet the needs of the warfighters on the ground.

“When I was growing up as a young Marine, we didn’t have things like this,” said Thomas Hazlett, Executive Director of the Marine Corps League. “We didn’t have the knowledge that is displayed today. What we can expect to see, wear or ride in. So this is a great way for young Marines and Corpsman to see that the potential future is and help shape that future. ”

“We are the ones that are going to be operating these vehicles in combat,” said Sgt. John Copleman, 3rd Amphibious Assault Battalion. “I think it is great for us to be able to meet the makers and let them see who will be using these. You can’t get the right answer unless you meet the Marines who will be using them.”
Hazlett added that this link between the younger Marines on the ground and the future of the Marine Corps is of vital importance to the success of the Marine Corps.

“Like any armed force, we need to have a vision of what the future holds,” said Hazlett. “We don’t know exactly what environment we will find ourselves ten years from now. Right here at this expo, some of this very equipment will be the equipment that our Marines will go into battle with in the future. “

Marine West is one of three expositions hosted annually on Marine Corps installations. The Marine South Expo is scheduled for April 12-13, 2017, at Camp Lejeune, N.C., and the Modern Day Marine Expo will take place at Marine Corps Base Quantico, Va., Sept. 19-21.