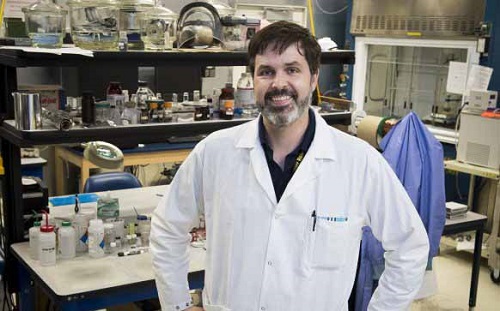 AUGUST 10, 2017, ADELPHI, Md. – Scientists from the U.S. Army Research Laboratory and Brown University have teamed up to develop solutions that would extend the battery life of GPS gear, mobile phones, field laptops and other Soldier technology, including robots.

Through a Cooperative Research and Development Agreement, or CRADA, negotiated by the laboratory’s Technology Transfer and Outreach Office, military and university researchers are attempting to address the difficulty of characterizing and then engineering the solid electrolyte interphase, or SEI, layer that forms on the anode of lithium ion batteries, with particular emphasis on experimental silicon anodes with very high capacities for lithium.

The Army is working to replace all alkaline and nickel metal hydride field batteries with lithium ion, or Li-ion, batteries, which provide the best energy density of any commercial battery type. This means Li-ion batteries will power all Soldier communication and GPS gear.

“The Army is developing hybrid vehicles for use on the battlefield and that means they will also use Li-ion batteries. Certain high-energy applications such as reactive armor and directed-energy weapons also seem suited for Li-ion batteries, although those technologies are still developing,” Cresce said.

The Army is interested in SEI research for Li-ion batteries because the SEI determines if a battery will cycle or whether harmful side reactions will consume the electrolyte components, he said. The SEI is a solid layer formed by the decomposition of the liquid electrolyte components. It is an electrolyte, meaning that it must allow Li+ to move while still being an electrical insulator. And it forms a new material phase in between the solid electrode and the liquid electrolyte.

Researchers also want to make the SEI as thin as possible, so that Li+ can move quickly. The engineering process requires fundamental chemical and materials studies of the SEI and of battery materials to determine exactly what properties are important and how to affect them.

Under the research agreement, Brown University will provide expertise in the analysis of certain atomic force microscopy, or AFM, data analysis, and provide synthetic tools and raw materials for making the silicon nanowires and other deposited structures to be analyzed. ARL will provide state-of-the-art electrolytes that will be used for the in-situ portion of the atomic force microscopy studies, and access to its analytical tools, including the in-situ AFM, the Raman spectrometer, x-ray photoelectron spectroscopy and infrared spectrometers. ARL will also provide expertise in the preparation of in-situ AFM samples and other types of surface analysis.

New to battery research, the Brown team is well known for the development of these techniques, and it is a big benefit for ARL to tap into this expertise. The Army team is hoping to work with their Brown counterparts to learn more about the SEI that forms on the surface of silicon and tin anodes, which change their dimensions significantly as the battery charges and discharges. In those cases, the SEI must “breathe” and move with the electrode surface; otherwise it will crack and fail as a protecting layer.

ARL has had a few key successes with large impact to Li-ion batteries including the SEI-modifying additives and an aqueous-based Li-ion electrolyte system that relies on a lithium fluoride SEI. ARL synthesized many compounds to modify the chemistry of the SEI layer. One compound, a fluorinated phosphate isopropoxide, called HFiPP for short, has been widely successful in many types of Li-ion batteries in improving the performance of the battery through SEI modification.

“Many outside groups use HFiPP as part of their standard research electrolyte formulation because of its benefits to high voltage Li-ion battery longevity,” Cresce said.

“The other success, our water-based Li-ion electrolyte, is almost entirely dependent on the formation of an impenetrable lithium fluoride SEI layer to function. The advantage of a water-based electrolyte is that such a Li-ion battery would not be flammable, eliminating the concern about battery fires,” he explained.

“In the case of the water-based electrolyte, we are working hard to fully characterize the SEI layer, and we are in a race to discover how to make this layer on certain electrodes like carbon or lithium metal that would allow us to have a 4+ volt aqueous lithium ion battery,” he continued.