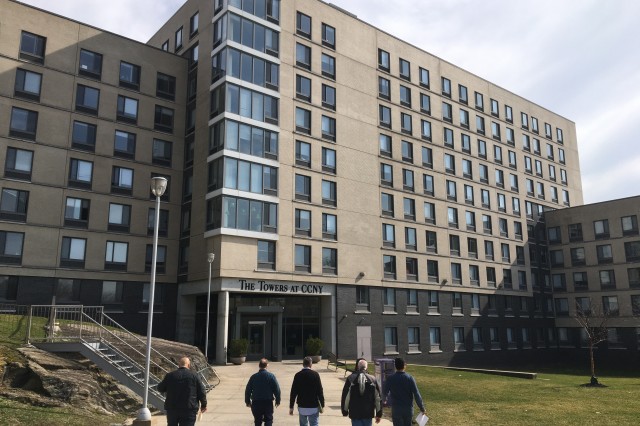 This week, construction is set to kick off as the Jacob K. Javits Convention Center in Manhattan will be refitted into a 1,000-bed hospital and an additional 1,800 field medical stations, officials said. Soldiers from the New York National Guard, U.S. Army Corps of Engineers, and civilian employees will prepare the medical facility, slated to begin operating in a week to 10 days.

Army to convert vacant buildings into hospitals as deadly virus spreads
The race against the virus is “an unbelievably complicated problem” that needs a simple solution, said Lt. Gen. Todd T. Semonite, commanding general of U.S. Army Corps of Engineers.

This solution, he said, begins with state governors.

Local leaders will pinpoint available buildings, like hotels, dormitories, and convention centers, in a prioritized order. Once identified, the existing buildings will be leased by the state and handed over to USACE. The corps will take over and hire contractors “in an exceptionally short amount of days,” Semonite explained at a Pentagon press briefing March 20.

The facilities will need negative pressure abilities to keep the virus sealed off from room-to-room, and be outfitted with the appropriate medical supplies based off a list provided by the Department of Health and Human Services and the Federal Emergency Management Agency, he said.

Finally, each facility will be staffed with medical professionals hired by the state, Semonite explained.

NEW YORK BECOMES ‘STANDARD-SETTER’ FOR USACE
“The Empire State” has become the epicenter for the airborne virus in the United States, as confirmed cases topped 30,000 Wednesday, officials said. This is a sharp rise from 4,812 cases Sunday, and more than 5% of the world’s confirmed cases. The state will receive 10,000 temporary rooms over the next few weeks.

New York will become “the standard-setter,” Semonite said, for how USACE will respond.

“Most of the governors are saying their peak [confirmed cases are] somewhere projected around the middle of April. This is not ‘take all the time in the world’ to do it,” Semonite said, adding USACE must provide a solution before the peak numbers are reached.

USACE has produced a “standard design” to retrofit medical facilities, Semonite said. He showed a pamphlet of the design, and said it was already sent to White House officials, and approved by both HHS and FEMA.

Army to help convert vacant buildings into hospitals as COVID-19 spreads
Due to the uncertainty of COVID-19, the Army is trying to understand the capabilities of every state, while focusing on hotspots like New York, California, and New Jersey.

“We can’t go everywhere, so we are really asking for the federal government to be able to help prioritize our efforts with FEMA, to be able to send us to the right place,” Semonite said. “This has to be weeks; this can’t be months.”