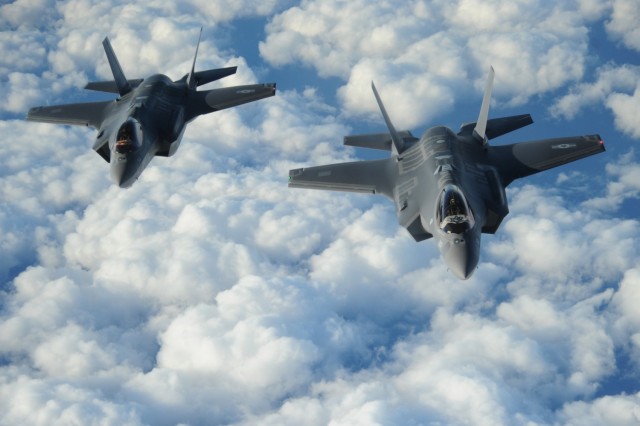 MAY 4, 2021 – The U.S. Army Corps of Engineers, Europe District has delivered an additional secure home for part of the Israeli Air Force’s fleet of F-35 fighter jets, with a small ceremony marking the completion of another Hardened Hangar project on site earlier this year in March.

The United States has partnered with Israel for several years on its F-35 program through the Foreign Military Finance, or FMF, program where the two nations partner on construction of strategic facilities.

“This project is a key element of the US-Israeli partnership to deliver a unique set of hardened hangars and operations facilities to house a squadron of F-35’s for the Israeli Air Force,” said U.S. Army Corps of Engineers, Europe District Commander Col. Patrick Dagon.

The project was the result of close partnership and coordination from beginning to end, with the Israeli Ministry of Defense providing the designs as well as local quality assurance specialists to complement the U.S. Army Corps of Engineers contract and project management efforts.

The ability to resist against a variety of threats is a key component of this project. The project team worked closely with a blast designer to account for site conditions and other concerns to ensure every component of the facility, including utilities, storage, life support and more are designed to highest, state-of-the-art standards for rugged survivability against any threat.

In addition to security, functionality is key with the site enabling for the rapid deployment F-35’s at a moment’s notice as well as interconnectivity with similar facilities the U.S. Army Corps of Engineers is also working on in the country.

“Every Israeli Ministry of Defense and Air Force leader who speaks about this project explains how this is not a theoretical and potential need – but rather an immediate and critical part of their duty to provide protection to the citizens of their country against the constant threat from enemies in the region,” said Contracting Officer’s Representative Ben Diamond with the U.S. Army Corps of Engineers’ Israel Area South Resident Office. “When they speak I feel a sense of genuine pride in the outcome and appreciation for our efforts to deliver this asset to their security and defense and I feel humbled to be able to make such an impact.”

The work is part of a larger partnership between Israel and the U.S. Army Corps of Engineers that has been in place for decades, beginning in 1979 after the Camp David Accords. That historic agreement called for the U.S. to support construction of new Israeli facilities to replace its Sinai airbases abandoned as part of the agreement and the U.S. Army Corps of Engineers led that construction effort.

Since then the U.S. Army Corps of Engineers has partnered with Israel on billions of dollars in construction efforts both through the Foreign Military Finance program as well as in support of similar agreements like the Wye River Memorandum geared toward encouraging peace in the region.

This latest F-35 project completed in Israel is not the first such hardened hangar project the U.S. Army Corps of Engineers has helped deliver in Israel in support of the F-35 program and it won’t be the last. Work is already underway for multiple additional similar facilities to be constructed in the coming years as well as facilities to ensure their connectivity going forward.

Diamond looks forward to continuing to support the program as long as his assignment in Israel continues.

“There’s nothing as loud and motivational as the constant roar of the F-35’s taking off to remind the team on the ground the purpose of our dedication to the success of this project.”