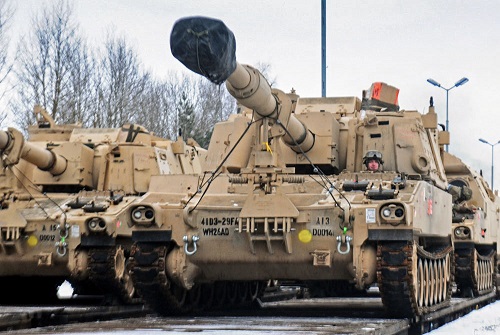 MARCH 1, 2017, WASHINGTON (Army News Service) – To get Soldiers the latest equipment they need now, say Army acquisition professionals, the Army must accept that it can’t have perfection right up front.

Maj. Gen. David G. Bassett, the Army’s program executive officer for Ground Combat Systems, said Monday during a public forum on Capitol Hill, that the Army must be willing to accept some temporary shortcomings if it’s going to meet the chief of staff’s demands to get needed capability out to the force quicker.

One example where this strategy has proven successful was with the Stryker Double V Hull capability, which provides additional protection to Soldiers in the Stryker.

“The traditional acquisition process would have held it out and not fielded it,” Bassett said at the forum, which was hosted by the Lexington Institute, “because the automotive systems under Stryker, the engine, was not enough to meet all of its mobility objectives.”

Still, the Stryker with the DVH went out to the force — with less than the best mobility under the hood — because without that extra protection, Bassett said, Soldiers were at risk.

“So what changed in Stryker DVH? We had a willingness to accept the shortcoming in mobility until we could offer more protection to our Soldiers,” he said. “People were getting shot at.”

Stryker DVH is doing “very well,” today, he said. And there’s now an engineer change proposal to upgrade the Stryker with a bigger engine and transmission to give it improved mobility.

“Senior leaders were willing to accept that shortcoming for some period of time,” he said of the Stryker DVH. As a result, an improved protection capability was fielded.

Also, some of the Strykers now have improved lethality that comes with the addition of a 30 mm cannon. Strykers equipped with the new cannon are referred to as “Dragoons.”

“We delivered the first vehicle on Stryker lethality within 15 months of receipt of funds,” Bassett said. “In the old way of doing business, we might have had some folks in the requirements community who would say ‘don’t field Stryker lethality, because it doesn’t have an airburst munition ready.'”

According to Baseett, in the past, the fielding of the Stryker with the 30 mm cannon in Europe might have been delayed until the airburst capability was ready for it.

“We said field it without airburst,” he said. “And as soon as that munition is affordable and capable, we’ll make sure it’s [good] to fire a round, but we’re not going to hold it up for just airburst.”

In his remarks, Bassett also pointed to advancements with the M109 self-propelled howitzer. He said the M109 needed both a better cannon and better mobility. The Army opted to upgrade the automotive capability before outfitting it with a new cannon.

“We know the Russians outrange us; we need to extend the range of our cannon,” Bassett said. “But we also realize that, until we got the automotive portions in place, getting at the cannon wasn’t going to do us much good, so we broke it into two pieces.”

“While we are meeting current demand,” he said, “our adversaries have been modernizing at an alarming rate.”

Development through the traditional Army acquisition cycle typically takes longer than five years. On the short side of acquisition, the Rapid Equipping Force can respond to an urgent operational needs statement from Soldiers or units with a material solution, typically in less than six months.

Output from the Rapid Capabilities Office, however, is meant to hit a “sweet spot” in development timelines of between one and five years.

It’s not meant to provide immediate solutions, nor long-term development of projects like aircraft or vehicles. Its purpose is to close the capability gaps with rapidly evolving technologies that require a dedicated fast-track to approval.

“We cannot wait for something to be developed in a perfect solution that would come to us in five or 10 years,” Piatt said. “What do we have in the inventory today that could be repurposed that would give us the ability to do electronic support and electronic attack [in addition to] electronic protection?”

According to Piat, waiting for a perfect solution would mean failing to meet the timeline provided by the chief of staff of the Army.

“We’re going to do rapid prototyping of these, or re-engineering, or a tweak to something that’s existing,” he said, “[and] issue it in a smaller formation in Eastern Europe … assess it in the field, do an operational assessment, and learn earlier so that we can get to right faster.”

The Rapid Capabilities Office answers to the secretary of the Army, chief of staff of the Army, and the Army’s chief acquisition executive. Other stakeholders include the G-2, the intelligence community, Army Forces Command, Army Materiel Command, and Army Training and Doctrine Command.

“They inform how we are getting after this problem,” Piatt said. “All agree we are focused on the right two [EW and PNT] to get out of the gate. We have to be able to solve ground maneuver in this contested and congested domain.”