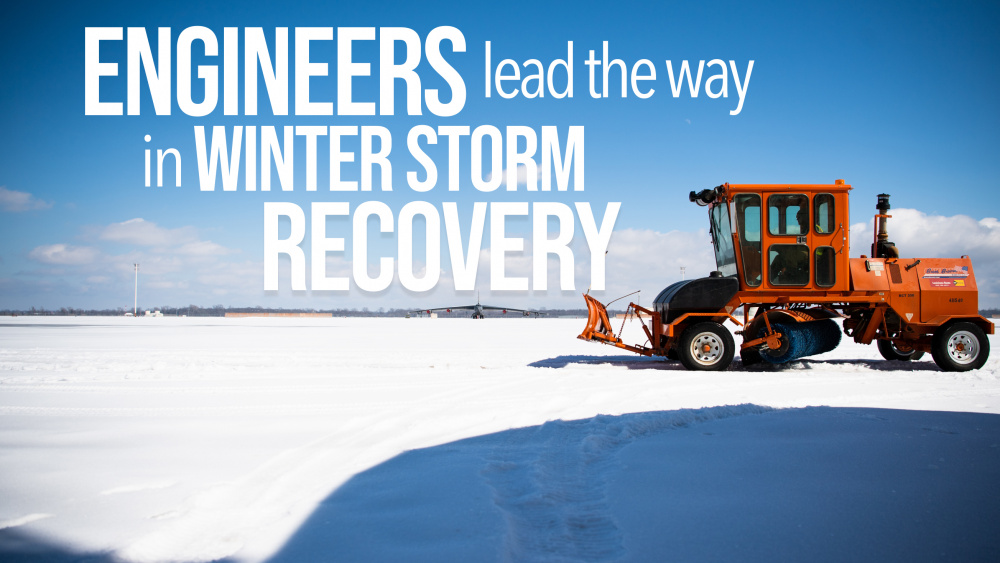 MARCH 3, 2021 – Nestled in the Northwestern corner of Louisiana, Barksdale isn’t regularly accustomed to the fall of a winter’s snow. So when inches of snow and record lows befell the installation, causing road closures, power outages and water breaks, recovery efforts were no small task.

Spearheading those efforts with everything from clearing snow to repairing damages, the 2nd Civil Engineer Squadron led the way in the winter storm recovery efforts.

“We were there, ready to get in the equipment and roll,” said Senior Airman Austin L. Steele, 2nd CES pavements and heavy equipment journeyman. “Our objective was to open up the roads so that people could get back to work and the mission could continue.”

Barksdale measured approximately four inches of snow on Feb. 14 and 15, with an additional two inches of snow and sleet on Feb 17, a number not seen on the base since 1983. Additionally, Barksdale tied the record low of 1 degree as the lowest temperature recorded on the installation.

Base and local infrastructure simply wasn’t built for handling this kind of weather causing water pipes to freeze and structures to cave. Coupled with impassable roads due to snow and ice, the damages caused the base to close with the exception of essential and emergency personnel.

“The combination of ice pellets, freezing rain and snow created an environment that was extremely hazardous for travel. Additionally, the water coming on to base was reduced due to off base water main breaks. ” said 2nd Lt. Haaken Hagenatwell, 2nd CES project execution officer-in-charge. “So, from a life and safety standpoint it was inadvisable for anyone other than emergency response and recovery personnel to be working on base in the immediate aftermath of the storm.”

While the weather caused most on-base activities to be drastically reduced, it had the opposite effect on the 2nd CES as they ramped up to 24-hour operations starting four days before the first snow even hit.

“We began procuring and staging equipment to help with snow removal and base recovery the Wednesday before the storm hit,” Haagenatwell said. “We ran 24-hour ops through the 23rd and are still operating at an accelerated tempo for recovery.”

The 2nd CES also stood up their unit control center, which was the hub for all CE recovery and response activities.

As the storm hit, the team began clearing roadways from snow and ice. However, the equipment usually used in the warm, humid Louisiana weather was not exactly tailored to the frigid, icy weather at hand.

“This is a once in a lifetime storm, we don’t usually see snow like this very often,” Steele said. “So, we don’t have specific snow equipment here, we just have our basic construction equipment that we had to make work.”

Using front loaders and road graders typically used for day-to-day construction operations, the 2nd CES innovatively found a way to successfully recover the base from one of the worst storms in the installation’s history.

While the sun is now shining and the storm has since passed, the CE team is continuing to lead the way in post-storm recovery.

“Over 200 CE work tasks were generated from storm related damages and issues,” Haagenatwell said. “So while CE got our mission partners back to business-as-usual, the recovery efforts are ongoing from our standpoint.”

Through the innovation and tenacity displayed by the 2nd CES throughout the onslaught of winter weather, the base and the mission can continue on providing the nation with long range global strike capabilities.

“What we do is important when it comes to trying to keep this base up and running,” Steele said. “Keeping the roads drivable and the flightline operational so our bombers can continue the mission, that’s our primary goal.”