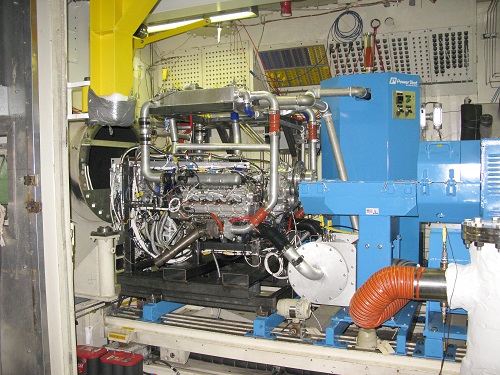 The high efficiency, innovative aviation diesel engine is a potential replacement for current manned and unmanned aircraft internal combustion engines. Designed by Engineered Propulsion Systems as part of an AFRL effort, the Graflight V-8, 4.3 liter engine is a “clean sheet” design specifically intended for aircraft use. It is liquid-cooled and capable of using either a composite or aluminum propeller.

The compact engine is built to use up to 40 percent less fuel than typical aircraft engines, with less vibration. This increased efficiency extends operational range and loiter time by up to 50 percent.

“Since this engine requires less fuel to fly the same distance, an aircraft or unmanned air vehicle could either carry more payload or fly a longer mission. Overall, if implemented, this technology has the potential to provide the Air Force a significant improvement in mission flexibility,” said Capt. Randall Hodkin, the APTO Aviation Working Group lead.

Using an innovative new control unit, the engine can operate using diesel, Jet-A, or JP-8 fuels that are readily available in-theatre, thereby reducing or eliminating the need to transport specialized fuels. This flexibility opens up the possibility of unmanned aircraft use in regions that were previously impractical.

“Often one of the greatest military logistics burdens is fuel transport,” said Hodkin. “If we can reduce or eliminate the need to ship specialized fuels, we’ve then reduced the associated cost and risk.”

The first step in turning this innovative design into reality was proof-of-concept testing, beginning with the recent ground tests conducted at the Arnold Engineering Development Complex. Here, the development team performed simulated flights at altitude in the facility’s Propulsion Development T-11 Test Cell, which was reopened for this test effort after not being used for a decade. The T-11 test cell simulates airflow at a variety of altitudes.

During the ground testing, the EPS Graflight engine was taken through a range of operational flight conditions, from sea-level to 30,000 feet and back, successfully meeting performance expectations and generating valuable data on performance factors such as fuel consumption, calibration, vibration and power output.

AFRL researchers will use this data to prepare for future flight testing, confirm the engine’s efficiency and validate the engine’s performance characteristics for future Air Force users.

Once the proof-of-concept is fully demonstrated, it will be considered for use in several Air Force manned platforms. Designers will also work to scale the engine down to a smaller variant, better sized for current Air Force unmanned aircraft.